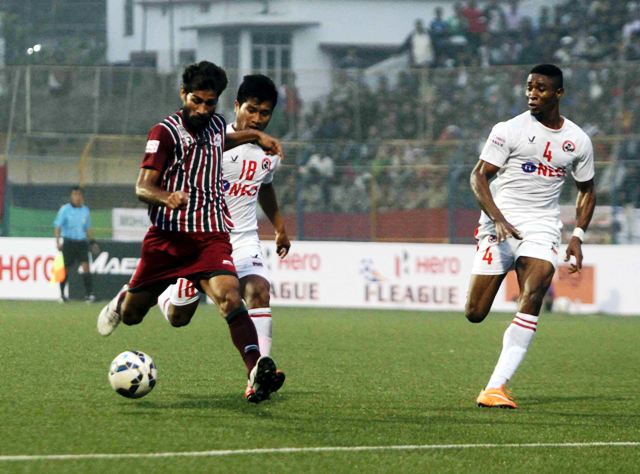 NEW DELHI: It was his poaching qualities for which Balwant Singh was referred to as the ‘fox in the box.’ But despite starting the season with a scintillating goal for Mohun Bagan in the Hero-League opener against Aizawl FC, the ‘fox in the box,’ has stayed sidelined for most of the season, much the agony of his fans. Ahead of Mohun Bagan’s second-leg Hero Federation Cup semifinal against Shillong Lajong FC, Singh spoke at length to www.i-league.org about the status of his injury, the pain and frustration in missing out, Bagan’s golden run, mission Federation Cup and much more.

Which goal would you rate as the most memorable one from 2014 Federation Cup?

As far I remember, I have scored 4 goals and all of them were the results of our team game. (After a pause), if you ask me for the most memorable one, I would pick the goal against Mohun Bagan in the semi-final. Anthony Wolfe took a loopy corner and I successfully poked into the goal, which put us in the driver’s seat.

The tournament was nothing sort of fairytale for you, signing off with a win over Sporting Clube de Goa in Kochi. How was the build up before the all-Goa final?

If you remember, we were going through a rough phase in the I-League. The Federation Cup was nothing less than the last throw of the dice for us. Albeit I had won the Federation Cup earlier with Salgaocar FC, I hardly got any chance for the Greens.

But then I was a senior campaigner for my team and I had to shoulder more responsibilities to sign off the season with silverware. We built up ourselves match by match and finally, when we landed up in the JN Stadium for the final, we had no second thought except winning it.

After starting the season on a high you succumbed to injuries. How has your life been in last few months?

Sheer frustration! When your Team is performing so well and you are sitting outside it’s like finding yourself in the middle of the Sea with your hands tied at the back. I scored against Aizawl FC and provided an assist; then again  scored against Salgaocar FC and provided another assist. It’s probably going to take another month for me to get going. Now it’s all up to Him (the Almighty) and my destiny.

Your teammates are belting goals this season.

All my Team mates are putting in the energy and hence, results are churning out for us. I wish I could be a part of all the action as well. Hopefully, I will come back strongly next season. I really can’t afford to let it go because of these injuries. They’re really hurting me.

How much significance does the Hero Federation Cup have for Mohun Bagan?

We missed our second consecutive Hero I-League Trophy by a whisker and now we can’t let the Hero Federation Cup slip through our fingers. The Tournament has gone well for us so far and I hope we are able to lift it on the 21st. That would also earn us the AFC Cup slot as well.

Given a choice, which one would you pick — a win in the Hero Federation Cup final or the forthcoming AFC Cup knock-out tie?

(Laughs) I would not let any opportunity slip through our fingers. We want to win both.

You had a dream Federation Cup in 2014. Which goal would you rate as the most memorable one from that edition?

As far I remember I had scored 4 goals and all of them were a culmination Team game. (After a pause) If you ask me for the most memorable one, I would pick the goal against Mohun Bagan in the semifinal. Anthony Wolfe took a loopy corner and I successfully poked into the goal which put us in the driver’s seat.

Did that result in your transfer to Mohun Bagan?

My contract was about to expire and I got a lot of offers from other Clubs as well. Finally, I signed with the Mariners and that’s why I’m here. Whomsoever I represent I always thrive to score and I’ll continue to do so.