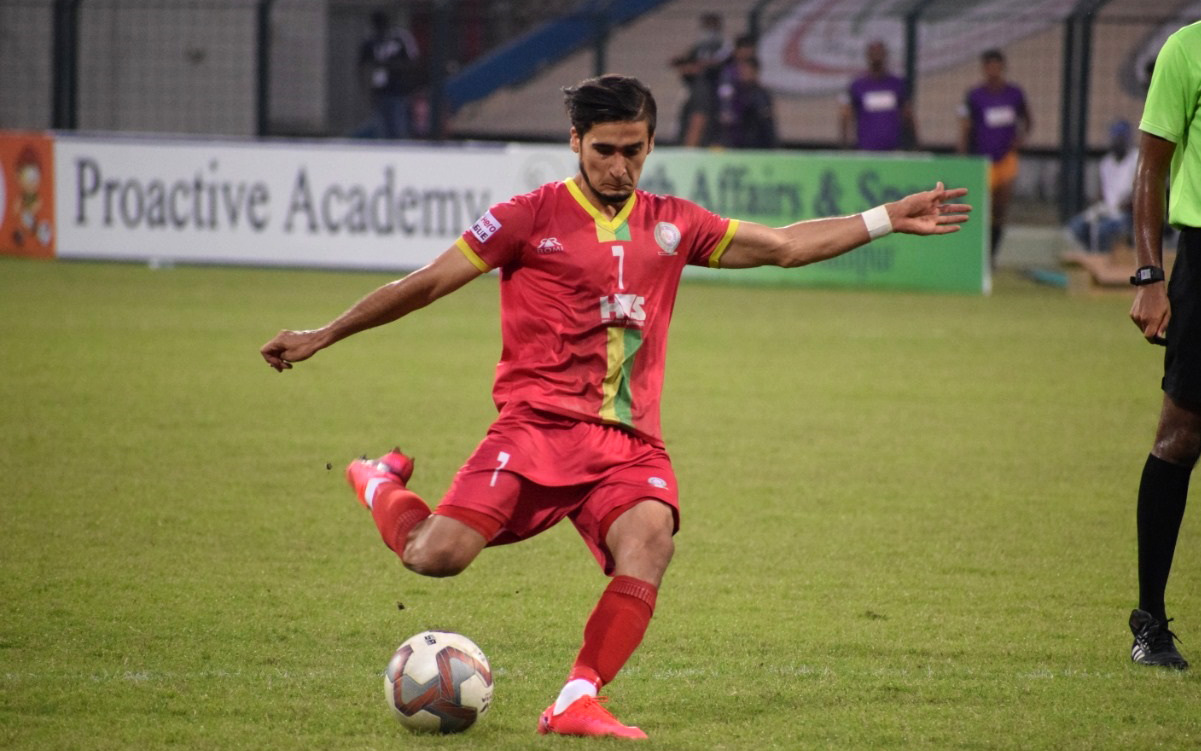 KALYANI: Komron Tursunov’s 81st-minute free-kick helped TRAU defeat RoundGlass Punjab FC 1-0 in a highly-contested match at the Kalyani Municipal Stadium in Kalyani, West Bengal today (March 15, 2021). With this win, TRAU go top of the league — level on points with Churchill Brothers (25) — and if Churchill lose against Mohammedan SC later in the day, TRAU can sit atop the table going into the next round of fixtures.

Coming on the back of a 3-3 draw against Mohammedan where they should have won the game comfortably, RoundGlass Punjab FC played like they had a point to prove, eager to throw their hat into the title race. In the 5th minute, Chencho Gleytshen cut inside the box from the left flank and shot inches wide of the goal as TRAU survived an early scare.

Unfazed, TRAU started playing on their own terms with Bidyshagar Singh and Komron Tursunov combining well in the final third. In the 12th minute, Bidya released a well-weighted through ball for Komron, who found the net but was flagged offside by the referee.

The best opportunity of the match perhaps fell to Komron Tursunov in the 25th minute when he released straight onto goal with a long ball from the defence line. With just the goalkeeper to beat, Komron’s shot lacked power and was easily saved by Kiran Limbu. As the match progressed, RoundGlass Punjab FC started dominating possession while TRAU played their usual counter-attacking football.

Suranjit Singh’s effort from distance in the 33rd minute almost gave RoundGlass Punjab the lead but the shot rattled the post and came back into play, only for Helder Lobato to clear the rebound away. Three minutes later, Joseph Olaleye got into the thick of things when his shot from a tight angle earned a good save by Limbu.

TRAU had a couple of goal-scoring chances early in the second half but failed to make the most out of it. In the 54th minute, Bidyashagar Singh’s chipped pass found Joseph Olaleye in the box. But, his volley from in front of the goal went over the bar as RoundGlass Punjab FC survived a major scare.

Both contingents seemed more careful of each other’s abilities in the second half as the match became a cagey affair. Chances came rare and when they did come, were rather wasted. In the 62nd minute, Phalguni Singh showcased brilliant individual skill as he dribbled past a couple of defenders, but his effort did not match his skill as his shot went wide of the goal.

In the 68th minute, Joseba Beitia found Papa Diawara inside the box, but the latter failed to make the most of the opportunity. And in the 73rd minute, Bidyashagar Singh’s left-footed attempt failed to hit the target.

However, there was more drama left in a match that seemed to be going towards a goalless draw. In the 79th minute, Mohamed Irshad was shown a straight red card for his heavy challenge on Komron Tursunov, who was clear on goal. A free-kick was awarded right outside the penalty box and the Tajikistan international made no mistake to smash the ball home. The free-kick was hit with such ferocity that Kiran Limbu was caught wrong-footed as the ball flew into the net.

With TRAU leading 1-0 and RoundGlass Punjab FC playing with ten men, TRAU committed bodies in defence to safeguard their lead and grab maximum points. The full-time scoreline read 1-0 as TRAU gathered all three points from the game to go top of the Hero I-League for the time being.