TRAU & Ozone Play A Goalless Draw To Wrap Up Campaign 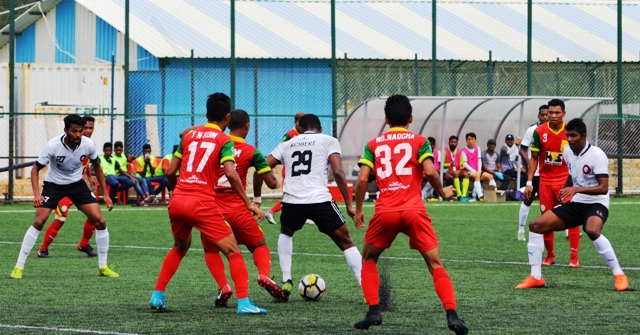 BENGALURU: TRAU FC and Ozone FC played out a goalless draw to conclude their 2017/18 Hero 2nd Division League final round campaign on Wednesday (May 30, 2018) at the FSV Arena in Bengaluru.

The teams traded a multitude of chances throughout the match, though there were a few which stood out as great opportunities to take the lead.

TRAU dominated for much of the first 45 minutes, with striker Princewill Emeka, as well as midfielders Angousana Luwang and Ngathem Prem Singh at the heart of their attacking forays.

Whereas, Ozone FC gave up possession on numerous occasions which allowed TRAU to put them under pressure. However, Nandakumar Singh’s charges failed to convert the chances they created.

In the 14th minute, TRAU’s Ronald Singh played a great ball into the penalty area to find a late run from Emeka, but the Nigerien striker’s flicked header flashed over the crossbar, much to goalkeeper Abhishek Das’ relief.

Abhishek then drew a stop from Prem Singh before a good ball over the top from Ronald found Angousana but the latter’s first touch was poor, allowing Ozone FC to clear.

Ozone FC, on the other hand, rose in confidence the longer the game wore on and should have taken the lead 38th minutes, but Robert De Souza missed the best chance of the first-half as he headed over from close range.

Robert and Sabeeth Sathyan had further chances early in the second-half without really troubling the TRAU defence, and it was the Manipuri side who nearly sneaked through when lively Emeka got an effort on target, but Abhishek made a good save.

Ozone FC threatened a goal on the hour mark, with skipper Gunashekar Vignesh setting up Sabeeth to strike on target, but the former India international was denied by a fine save from TRAU keeper Jedidi Haokip, who quickly recovered to keep out a follow-up effort from substitute Clyde Fernandes.

The remainder of the match was a frustrating time for TRAU, who dominated play but were unable to find a way through Ozone FC’s resilient defence.

With two minutes to go, Ozone FC had a golden chance to win the game when Anto Rashith connects with a header in a good position but does not hit the target, which summed up the day for both sides.