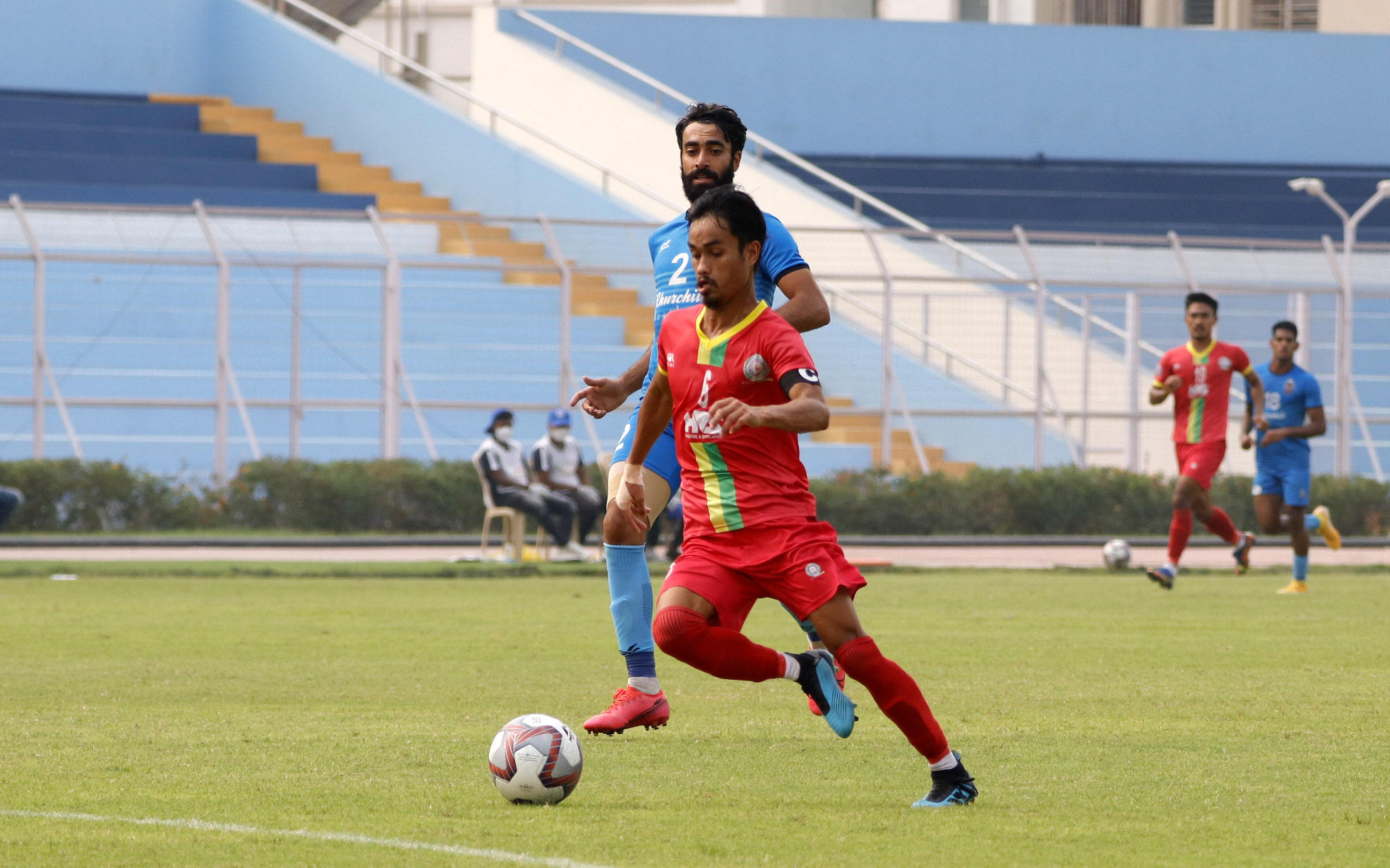 KOLKATA: A high octane top-of-the-table clash between TRAU and Churchill Brothers ended in a 1-1 draw at the Kishore Bharati Krirangan in Kolkata, West Bengal today (March 21, 2021) to force the Hero I-League title to be decided on the last day of the season. Luka Majcen’s strike was cancelled out by Phalguni Singh’s effort as the teams shared the points — with both goals coming in the first half.

Although TRAU stay on the top of the Hero I-League table, the Nandakumar-coached side are level on points (26) with Churchill Brothers and could be sharing their pole position with Gokulam Kerala FC if the Malabarians get a win against Mohammedan SC. If Gokulam win, three contingents — TRAU, Churchill Brothers and Gokulam Kerala FC — will have the chance to get their hand on the coveted trophy come March 27.

Churchill, desperate to put behind their woes in the Championship stage of the season that saw them succumb to two back-to-back defeats, started the match on an attacking note. The Red Machines could have taken the lead as early as the 2nd minute Luka Majcen was found inside the box by a well-weighted pass. Majcen’s shot from close range however failed to find the net, as TRAU survived an early scare.

Out to prove a point, Churchill played with the tenacity of champions in the opening minutes and heaped pressure on TRAU. In the 12th minute, Clayvin Zuniga was found by Luka Majcen inside the box, but Zuniga, who was already in an offside position could only rattle the bar with his effort. Seven minutes later, Churchill Brothers upped the ante and Zuniga once again tested TRAU’s Amrit Gope with a powerful shot. Gope made a world-class save to deny Churchill the lead.

In the 23rd minute, Bryce Miranda missed a sitter and probably the best goal-scoring opportunity of the match. With the goalkeeper out of position, Miranda had to just tap the ball home from close range, after Wendell Savio had found him inside the box. Instead, he fluffed his shot.

All of Churchill’s dominance finally paid off in the 27th minute when the referee pointed to the spot for a clumsy tackle inside the box. Luka Majcen stepped up to take the penalty kick and smashed it home to hand Churchill the lead as the scoreline read 1-0.

Playing catch-up to Churchill Brothers for much of the first half, TRAU rarely showcased shades of their former selves. With Komron Tursunov leaving for international duty with Tajikistan, the Nandakumar-coached side struggled to jot attacks as Bidyashagar Singh was left isolated up front.

However, all it took for the Manipur-based club was one through-ball in the 43rd minute to bring the match to level terms. A well-weighted pass by Bidyashagar Singh split the defensive pairing of Hamza Kheir and Keenan Almeida in two as Phalguni Singh beat them for speed and latched onto the ball. With just the opposition goalkeeper to beat, Phalguni slotted the finish home and made the scoreline read 1-1.

After the half-time scoreline read 1-1, TRAU, spurred by their equalizer had a great chance to take the lead in the 48th minute when Joseph Olaleye tried to find Bidyashagar Singh inside the box. Had Olaleye’s pass been better, TRAU could have taken the lead.

In the 54th minute, much against the run of play, Wendell Savio hit the crossbar with a curling shot from outside of the box. The ball fell to Clayvin Zuniga, who could have had a chance to score, but was unable to control the ball as TRAU survived a dangerous spell of play. Two minutes later, Kingslee Fernandes found Luka Majcen inside the box but Majcen skewed his shot wide of the goal.

Churchill Brothers upped the ante after missing a couple of chances and pinned TRAU to their own half. Clayvin Zuniga came agonizingly close to handing Churchill Brothers the lead in the 69th minute when he burst past the TRAU defence line. His shot, however, got lost in the jungle of TRAU legs causing chaos inside the box.

The Red Machines continued their attacking dominance but once again were left frustrated in the final third as TRAU committed bodies in defence and defended in numbers. Half chances for Clayvin Zuniga and Luka Majcen went amiss and TRAU playing on the counter, had rare chances in front of the goal.

TRAU could have taken home all the three points with one minute of regulation time to go as Bidyashagar was played in on goal by Joseph. The forward tried to round the advancing Shibinraj but the Churchill keeper did brilliantly to take the ball off his feet.

In the end, the scoreline read 1-1 as both teams shared the spoils of battle. With this draw, Gokulam Kerala FC could very well go level on points with TRAU and Churchill Brothers at the top of the league if the Malabarians win their clash against Mohammedan SC.