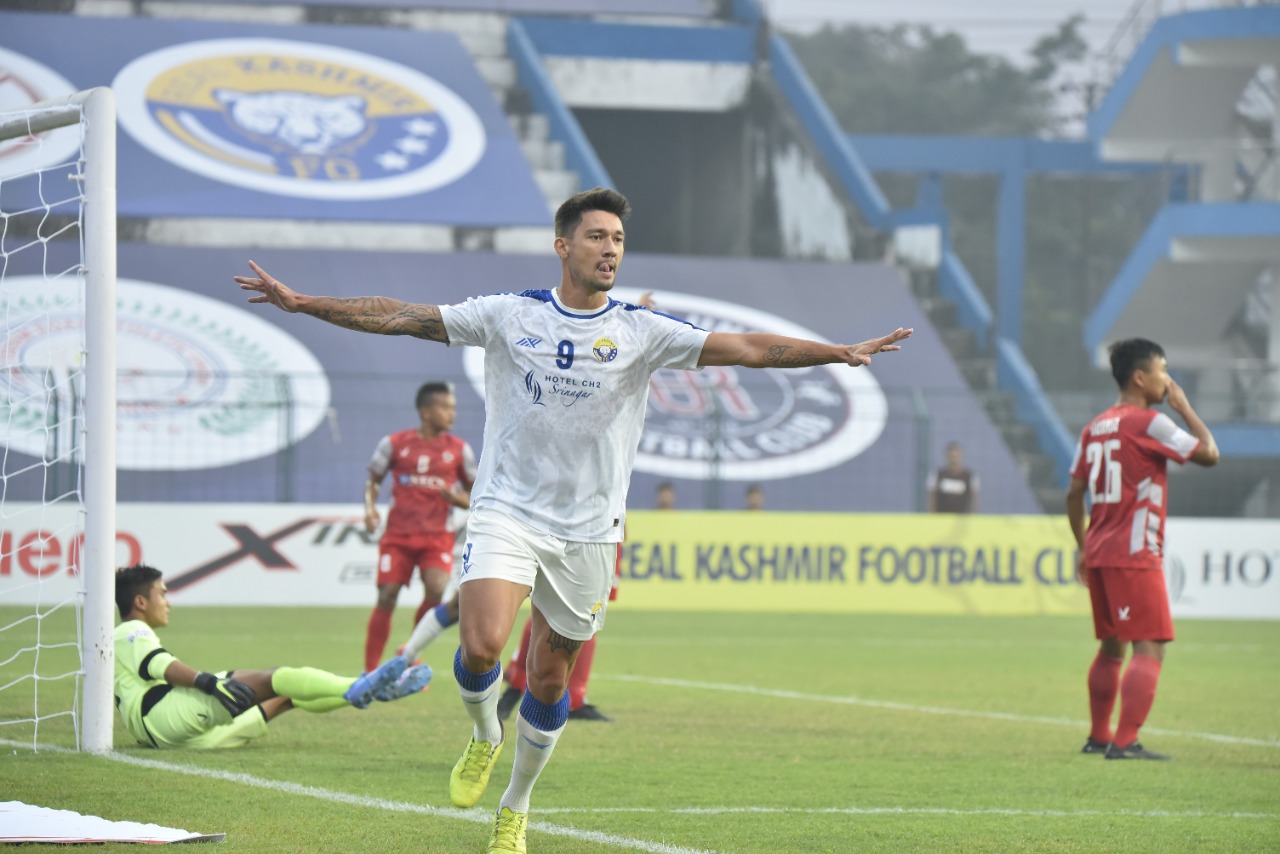 Kolkata: Tiago Adan and Mason Robertson found themselves on target as Real Kashmir picked up a thrilling 3-2 win over Aizawl FC in their first game of the I-League 2021/22 season on Monday (December 27, 2021). While Tiago scored a brace in the match, Mason Robertson scored the crucial third goal for the Snow Leopards in the second half of the match. Aizawl FC did well to lead in possession stats, and remain in contest till the final whistle.

The encounter started with Real Kashmir sitting deep in their half and allowing Aizawl FC to keep the ball in the opening minutes. Ayush Chhetri got the first shot in the match away in the 7th minute of play after he received a pass from a corner. But his long-range hit went wide off the target.

Two minutes later, Real Kashmir received a corner of their own and Surchandra Singh sent the ball straight into the box, which was headed in to the back of the nets by striker Tiago Adan to give the Snow Leopards a 1-0 lead in the 9th minute.

Aizawl FC continued to enjoy the possession as the first half progressed but could create very little chances. With skipper Mason Robertson’s dangerous long throw-ins, and Surchandra Singh’s threatening run-ins from the left flank, Real Kashmir kept their threat going despite not having much of the ball with them.

Aizawl FC received their second corner in the match at the 29th minute, but the long-range shot from skipper R Malsawmtluanga went awry and the opportunity was missed. Nearly 10 minutes later, Aizawl FC received their third corner, and this time, Lalthakima Ralte latched on to the cross with a direct header and scored the equaliser in the 38th minute to make it 1-1.

Unfortunately for Aizawl FC, Real Kashmir’s Tiago restored the lead in the additional minutes of the first half. A corner from Surchandra reached Mason, but his shot was parried away by the goalkeeper Lalmuansanga to Tiago, who latched on the rebound and struck it in to make it 2-1 as the first half came to a close. 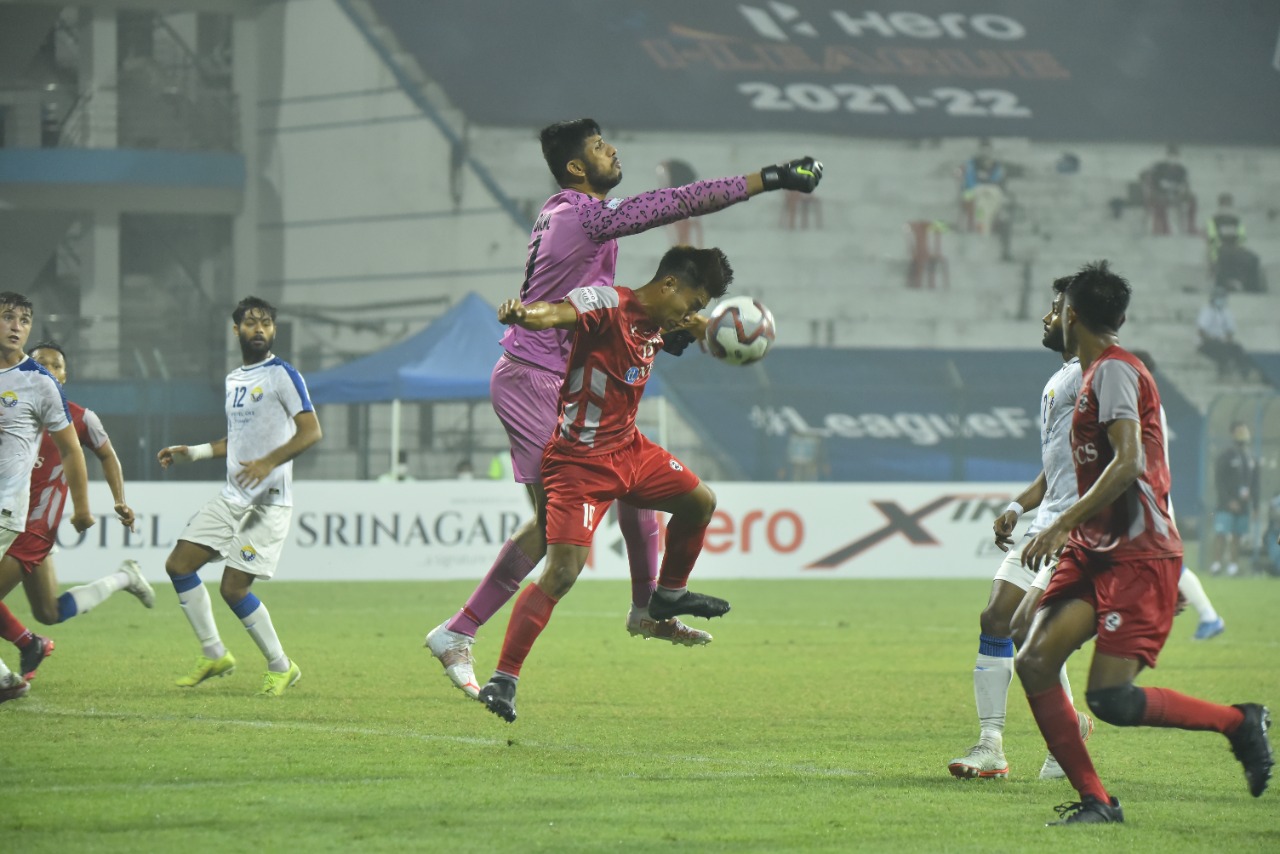 The second half started with Aizawl continuing to keep the possession, and searching for the equaliser. The first opportunity presented in the 49th minute for the club from Mizoram with a corner, but nothing threatening came on the back of it. Real Kashmir FC’s defender Prakash Sarkar did well to keep a check on Aizawl FC’s counter-attacks, and ensured there is no tough moment in store for goalkeeper Bilal Khan.

In the 66th minute, Mason Robertson got the third goal for Real Kashmir, as he managed to get a header on the ball on a cross by Thoi Singh from the left flank. The ball went into the nets and Real Kashmir went 3-1 up.

A moment of danger came for the Snow Leopards in the 74th minute as Aizawl FC received an indirect free kick inside the box with Bilal making the mistake of collecting the ball from a backpass. But Real Kashmir valiantly blocked the shot and Aizawl FC once again failed to grab the opportunity.

Just when it looked like Real Kashmir would run away with the win, a twist came in the 85th minute with Ramhlunchhunga scoring a goal with a shot from outside the box to reduce the deficit.

Tiago Adnan, who was the star performer for Real Kashmir, was stretchered off with three minutes remaining in the match. Five additional minutes were added to the game, and Real Kashmir comfortably defended the incessant attacks from Aizawl FC in the injury time and won the match 3-2.

Real Kashmir will next face off against Kenkre FC on 31st December 2021, while Aizawl FC will challenge Mohammedan Sporting Club on 30th December 2021.​