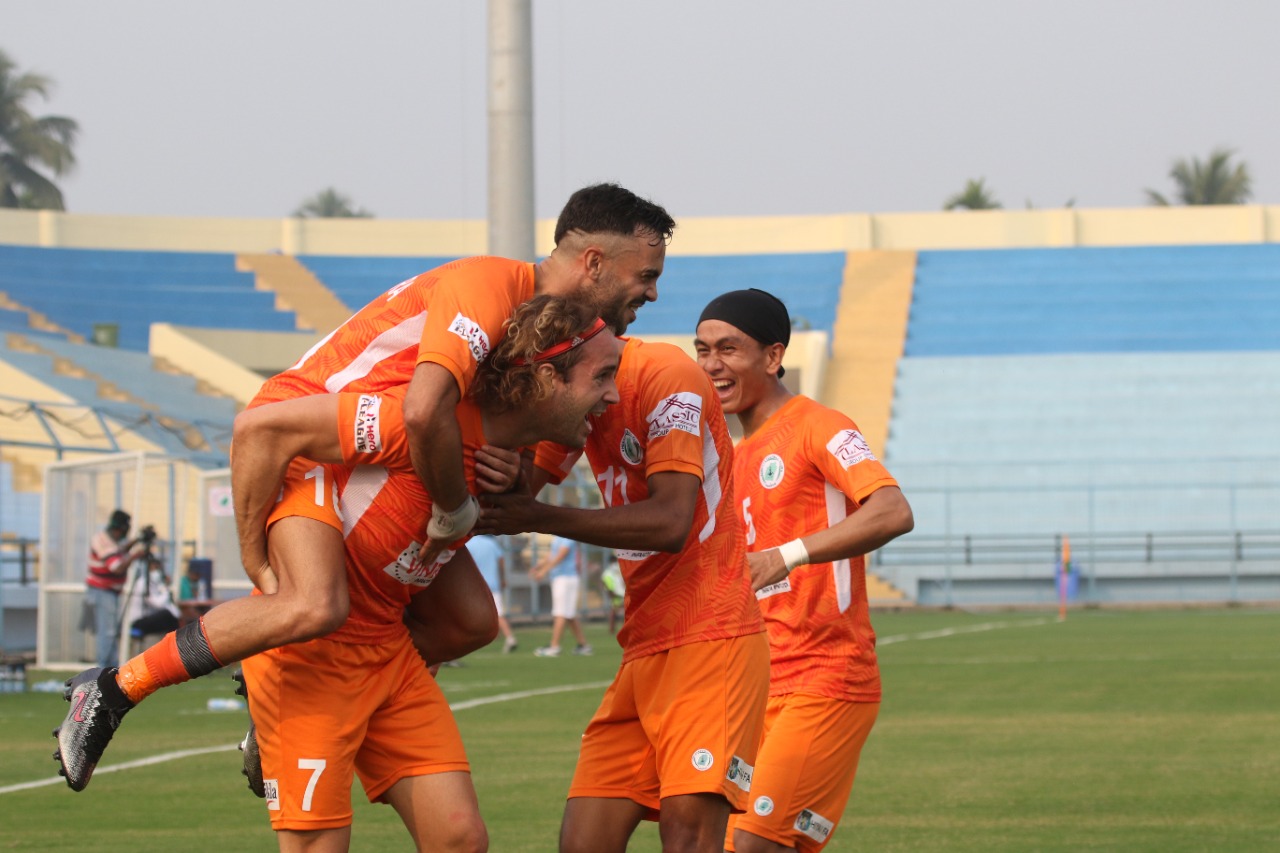 KOLKATA: A sensational treble on debut from Spanish striker Sergio Mendiguchia led Neroca FC to a 3 – 2 victory over Hero I-League newcomers Sreenidi Deccan at the Naihati Stadium here in Kolkata today. Girik Khosla and David Castenada Munoz got on the score sheet for Sreenidi Deccan, but the odd goal in five fell the way of Neroca FC to give the side from Manipur all three points in this Hero I-League clash.

After a scrappy start to proceedings, Neroca FC were the first side to make headway in the contest as they broke the deadlock in the 15th minute through new signing Sergio Mendi. As his fellow new Spanish recruit Juan Mera chipped in a free kick from a central position, Mendi came alive in the box as he brought down the ball with his chest and bundled it home from close range after Sreenidi goalkeeper Ubaid CK made the save at the first time of asking.

The Spanish duo of Sergio Mendi and Juan Mera combined again from a set piece to devastating effect in the 22nd minute. Standing over a free kick from a wider position this time, set piece specialist Juan Mera whipped in a fantastically shaped flat delivery into the box which was promptly nodded home by striker Sergio Mendi for his second goal of the game. The goal sparked wild celebrations among the Neroca outfit who rejoiced the striker’s brace on his Hero I-League debut.

Already two goals behind, Sreenidi Deccan needed a period off stabilising to avoid conceding further, as Neroca hunted for more goals. Sreenidi Deccan grew into the contest gradually and displayed more confidence on the ball, without having much to show for it on the scoreboard yet. 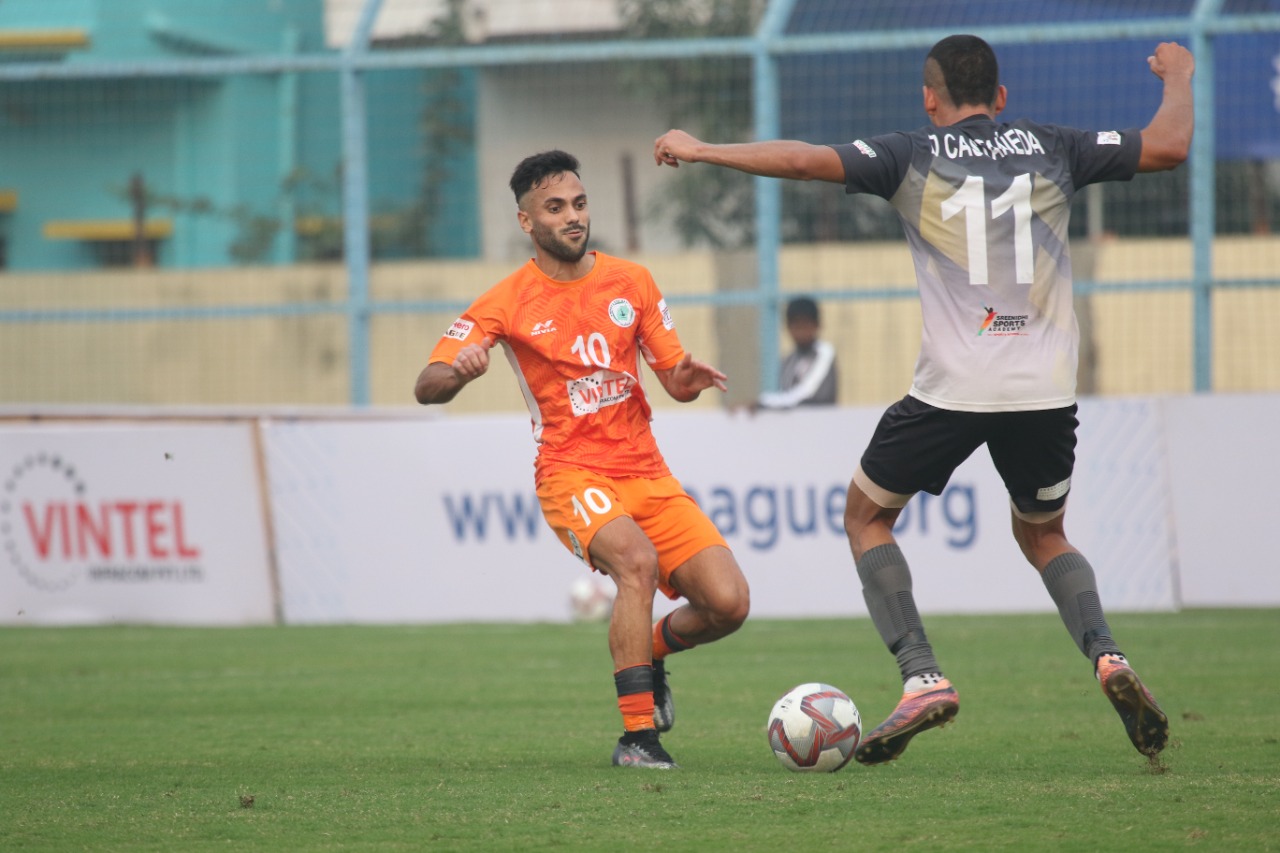 In the 41st minute, Girik Khosla was on hand to reduce the arrears for Sreenidi Deccan. Sriram channelled a brilliant pass into the box for Phalguni Singh, who raced on to the ball to produce a fantastic square pass for teammate Girik Khosla at the far post, who tapped the ball in with the goalkeeper taken out of the equation with the pass.

Sreenidi Deccan had a glorious chance right before the break to go into half time on level terms, but goalkeeper Shubham Dhas made a solid double save to keep Neroca’s lead intact. Lalromawia beat his defender Dhananjoy inside the box, but could not beat the goalkeeper with his effort as he should have arguably done better with the shot.

After the break, Sergio Mendi made it a dream debut in Indian football in the 49th minute, completing a perfect hat-trick; scoring with his right foot, head and left foot respectively. The Spanish striker doubled his side’s advantage again with his best goal of the lot, lobbing goalkeeper Ubaid with his footed first time effort. Ubaid rushed out from his goal line hoping to clear the ball, but he was beaten to it by Mendi, who caught the keeper stranded in no man’s land and lifted the ball over him from 20 yards out.

This enthralling encounter saw another twist in the tale in the 59th minute. Colombian striker David Castaneda Munoz announced his arrival into the Hero I-League this time with a perfectly executed header. As Lal Chungnunga sent in a hopeful looping ball into the box, Munoz rose highest and headed the ball back across goal, beating goalkeeper Shubham Dhas all ends up to revive the contest once again. The chance was particularly difficult as Munoz had to generate his own power on the header.

As the side from Andhra Pradesh grappled for an equaliser, Neroca let their experience come to the fore and denied a buoyant Sreenidi Deccan any further looks on goal. The Manipuri side halted the pace of the game when on the ball, and got plenty of bodies back in defence off it. Carefully executed match management eventually secured the win for Neroca FC, who will now take on defending champions Gokulam Kerala in their next match on 30 December 2021. Sreenidi Deccan will take on TRAU on 30thDecember 2021 as well.