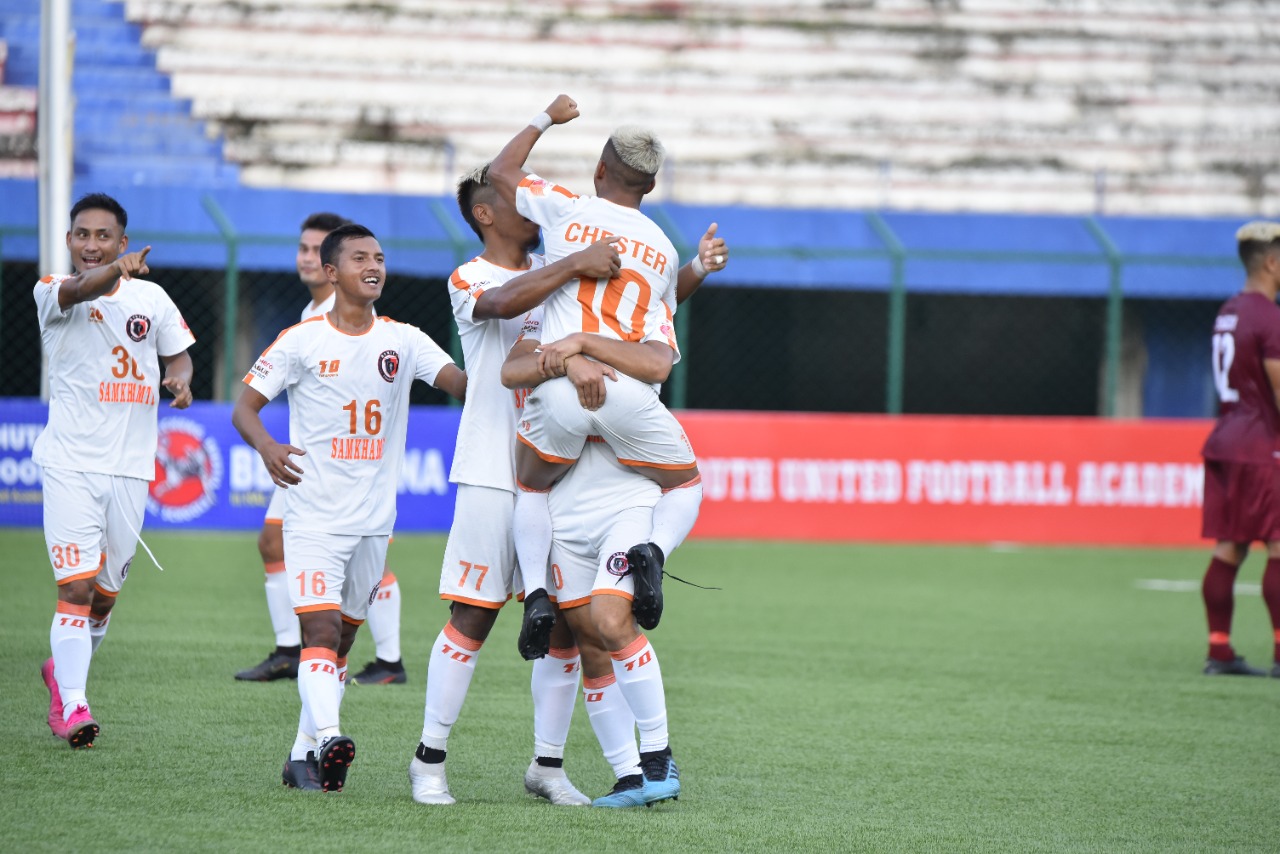 BENGALURU: Ryntih SC have ended their maiden Hero I-League Qualifiers campaign on a positive note, as they emerged 2-0 winners over FC Bengaluru United here at the Bangalore Football Stadium. It all went wrong for FC Bengaluru United, who were in a must-win situation to have any chance of progressing into the final round of the Qualifiers. Instead, the home side were outplayed over the course of 90 minutes by their opponents from Shillong. Sheen Stevenson and Carlos Challam got their name on the score sheet for Ryntih SC.

The match was action-packed right from the first whistle, as Ryntih SC liberally committed men forward in attack. In the first minute itself, Kinshuk Debnath fouled Chesterpoul Lyngdoh close to the box. From the resulting free-kick, Sheen Stevenson swung in a dangerous looking ball, which was fisted away by Bengaluru United goalkeeper Srijith. It was an early test of nerves for the young goalkeeper, who replaced regular first-choice custodian Kunzang Bhutia for this match.

FC Bengaluru United then had two quickfire chances from two Sanju Pradhan set pieces in the 7th and 8th minute. From the first, Pradhan delivered a cross from the inside left flank, which was flicked on dangerously towards goal by the Slovenian Luka Majcen. Ryntih SC goalkeeper Padam Chhetri leapt to grab the ball with both hands. Dharmaraj Ravanan could not produce an effort on target in the following minute as he should have done better from his free header at the near post from a Sanju Pradhan corner. 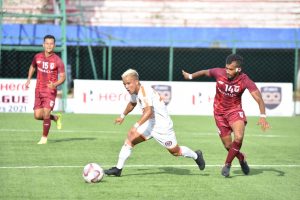 In the 10th minute, FCBU’s Ronaldo Oliveira produced a moment of quality as he set off on an individual run with the ball from the halfway line to bear down on goal. It would have been a sublime goal had Oliveira found the finish to match the solo run, but he fluffed his lines and dragged his shot past the far post. Alternatively, Oliveira could have squared the ball for his teammate Luka Majcen, who would have had an easy tap in at the far post.

FCBU conjured up another chance in the 26th minute through good combination play. After Oliveira crossed the ball in from the right flank, Luka Majcen headed the ball in the path of Denil Rebello, whose acrobatic first-time volley was directed straight towards goalkeeper Padam Chhetri. The rebound fell to Luka Majcen, but the angle was too tight for the Slovenian to rebound the ball home.

The first goal of the game came in the 29th minute for Ryntih SC, scored by the mercurial Sheen Stevenson. After Stevenson received a pass from Allen Lyngdoh, he found himself in acres of space inside the box. Stevenson made the most of the space and time afforded to him to send a carefully placed curling shot into the back of the FCBU net.

Ryntih SC were heroically denied a second goal in the 39th minute as Kynsailang Khongsit blocked Chesterpoul Lyngdoh’s shot off the goal line after a mix-up in the back for FCBU. FCBU were desperately looking for a change in their fortunes to have any chance of getting a result from this match. The Bengaluru United management staff made a bold call in the 41st minute, replacing Luka Majcen for Subhash Singh, leading to an all-Indian lineup on the field. Subhash Singh upped the ante for his side since his arrival, but the Bengaluru side went into halftime trailing 1-0. 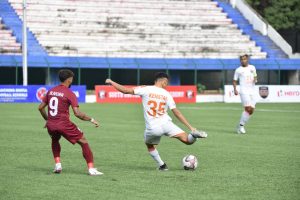 FC Bengaluru United were expected to throw the kitchen sink at Ryntih in the second half, as the home side found themselves in a must-win situation to progress further into the Hero I-League Qualifiers. However, Ryntih SC displayed a composed effort to regain control of the game after the restart.

In the 62nd minute, Sheen Stevenson tried his luck from range. His effort bounced right in front of the goal and had goalkeeper Srijith scrambling to make the save, resulting in a corner. In the 73rd minute, Ryntih carved FCBU open again, as the Shillong based side found plenty of space to exploit as FCBU committed more bodies forward in attack. After a free-flowing team move, Sheen Stevenson played Reson through on goal, but he miscued his finish and sent the ball sailing over the bar.

However, Ryntih SC got their just reward and doubled their advantage in the 77th minute through substitute Carlos Challam. The chance came after Stevenson robbed Sanju Pradhan off the ball and progressed up the pitch before being fouled 20 yards from goal by the retrieving Pradhan. Ryntih’s number 10 Chesterpoul Lyngdoh stood over the free-kick, and his thunderous effort smashed the crossbar as the ball bounced back into play. FCBU defenders present in the box failed to make the clearance, and the ball fell fortuitously back to Carlos Challam, who made no mistake with the finish. Chaos ensued as Carlos Challam was seemingly in an offside position, causing FCBU players to appeal in unison. However, replays showed that since the last touch came off an FCBU player, Carlos Challam’s goal was perfectly legal.

It wasn’t Bengaluru United’s day as the home side were confined to long-range efforts on goal for the remainder of the match. It proved to be a disappointing campaign for FCBU, who were touted as one of the favourites to win the competition in this year’s Hero I-League Qualifiers.

Ryntih SC finally registered their first points in the competition with this comprehensive win, finishing above Bengaluru United in Group A.