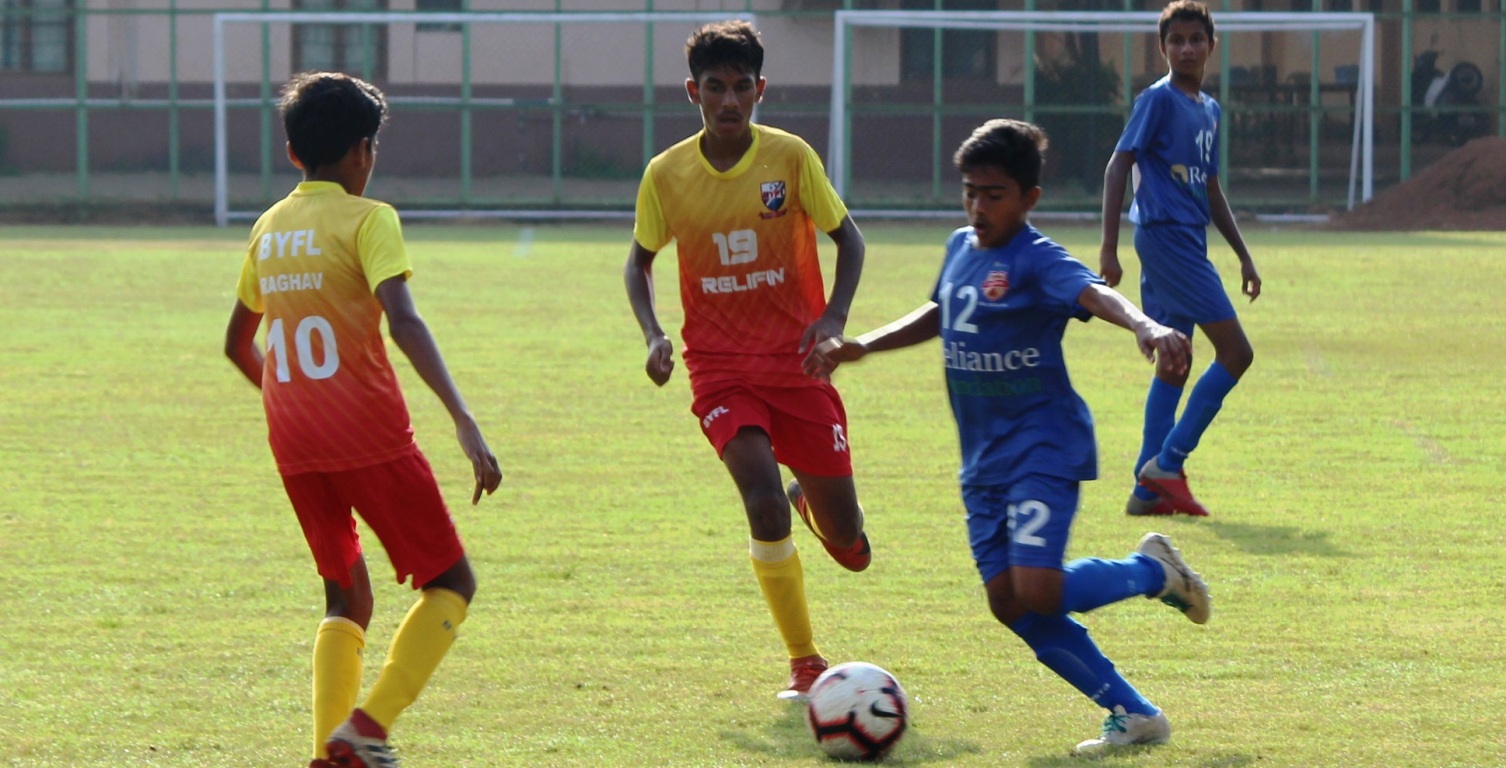 Madgao, May 20, 2019: The final of the Hero Sub Junior League 2018-19 will see Reliance Foundation Young Champs take on Bengaluru FC as both sides clinched semifinal victories on Monday at the Rosary Ground in Navelim, Goa.

RFYC got the better of Bengaluru Youth Football League in a thrilling contest that ended in a penalty shootout after a 2-2 draw in regulation time in the first semifinal. In the second, Bengaluru FC came back from a goal down against Sudeva FC to record a 2-1 win and seal their berth in the summit clash.

The first half of the first semifinal saw RFYC dominate proceedings from the start as they took the lead through Yanglem Singh in the ninth minute as his shot from distance flew into the top corner. Just three minutes later, it could have been two goals for the Mumbai-based side as winger Prantik Saha raced into the box from the left but saw his shot crash off the crossbar and back into play.

At the break, the scoreline read 1-0 in favour of RFYC but the gap could have easily been more if not for some terrific goalkeeping from BYFL’s Som Kumar, who made a number of top-notch saves in the first half. The best of the lot came in the 23rd minute as Som dived brilliantly to his right to stop a rasping effort from RFYC’s Harsh Vaghela from inside the box.

BYFL came out charging in the second half and looked to press their opponents high up the pitch, which saw them come close to the equalizer. However, as the tempo settled down, the game became a battle between RFYC forward Harsh Palande and the BYFL custodian.

In the 50th minute, Som produced yet another fine save to deny Harsh and two minutes later, a long-range shot from the striker seemed destined for the top corner but once again, the keeper clawed it away to safety. Two minutes from time, in the 68th minute, Harsh finally found the net as he latched on to a through ball before rounding the goalkeeper and tapping the ball into the empty net.

RFYC were now 2-0 up and seemed set for a place in the final but BFYL were not ones to back down. With a minute to go, Dhananjay Darji scored with a powerful volley from inside the penalty area to halve the deficit and in the first minute of added time, he was on hand to level the scores as he headed in a free-kick from the right flank and sent the match into a penalty shootout.

It was a battle of nerves in the shootout and at the end of it all, it was RFYC goalkeeper Aniket Ghosh who was the hero for his team. He saved three out of four penalties to take his side to the final as Viraj Arora remained the only scorer for BYFL. On the other hand, RFYC scored three out of their five spot kicks – through Supratim Das, captain Narendra Naik and Yanglem Singh.

In the second semifinal, Sudeva FC and Bengaluru FC faced off in an absorbing battle that saw great end-to-end action. BFC started off on the front foot as they created some early openings but just six minutes into the match, it was Sudeva who took the lead through midfielder Hiti Seb from the penalty spot.

The side from Bengaluru upped the ante as a result, coming close to scoring on a number of occasions. Ishaan Raghunanda had a chance to shoot from the right flank and kept his shot on target, which was tipped past the post by keeper Pankaj Bhandari in the 16th minute.

Four minutes later, they were inches away from equalizing as a chipped effort from the BFC striker was cleared off the line in an acrobatic manner by Sudeva’s Bijay Champia. Soon, Rohit Negi had a chance from a free-kick from the right flank but his curling effort landed on the top of the net.

With the half coming to a close, BFC were not to be denied in the third minute of added time as they scored their first with a goal straight from the training ground. Skipper Gautam Rajesh played a short corner and crossed the ball from the left flank, which was headed in at the far post by defender Vinith Venkatesh.

Scoring just before the break certainly upped BFC’s confidence and they carried it on in the second half – taking the lead in the 40th minute. It was another aerial ball that did the trick as Ishaan’s cross from the right found Chandan Biju unmarked and he headed it home to make it two to BFC.

Sudeva tried hard to find their way past a sturdy BFC defence but could not gain the upper hand. In the 53rd minute, Bengaluru were inches away from their third goal as forward Yodhin Rishyak struck a powerful shot from the top of the box but saw it come back out off the post.

In the end, Bengaluru held on for the win and made their way into the final, that will take place at the Don Bosco Ground in Margao on Wednesday (May 22, 2019).