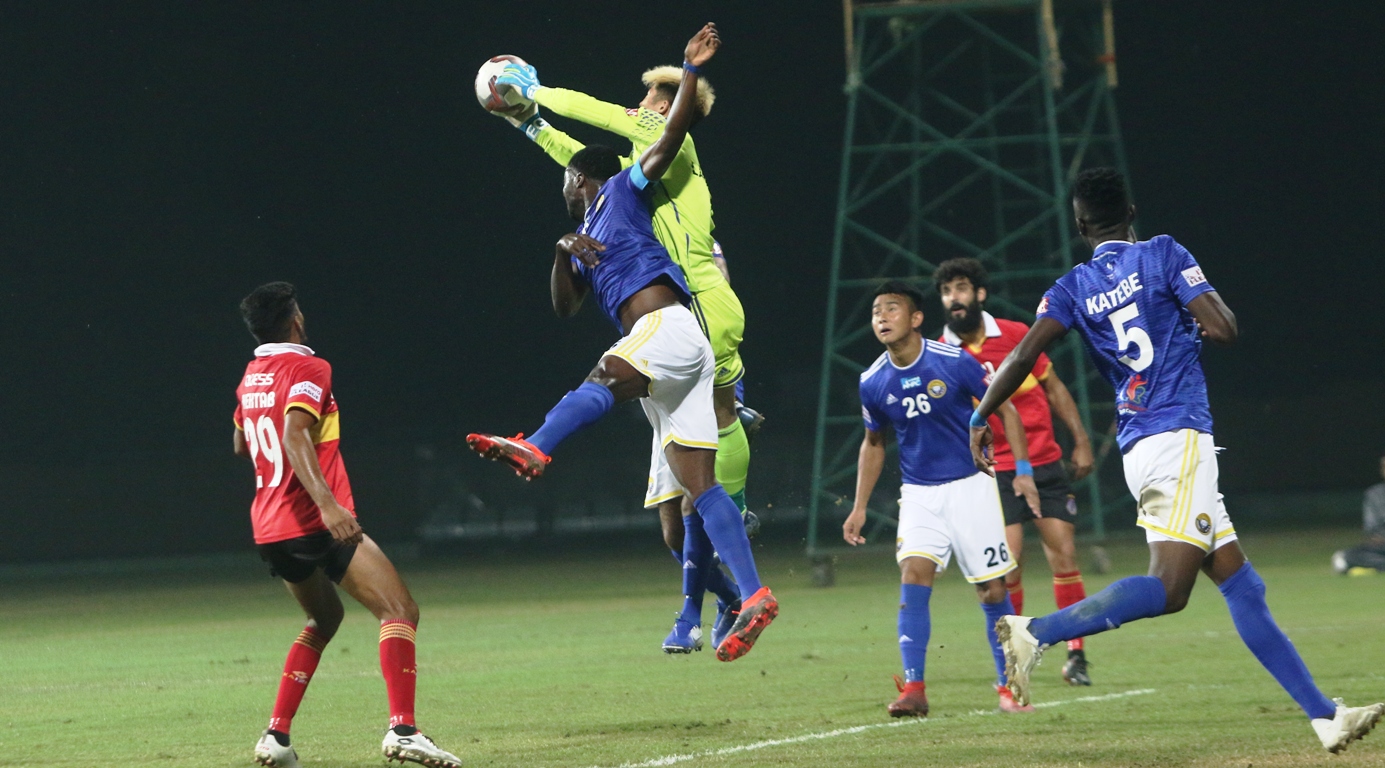 Kalyani, December 4, 2019: In what was the Hero I-League 2019-20’s first match played at the Kalyani Municipal Stadium, Real Kashmir FC were able to hold Quess East Bengal to a pulsating tie which ended 1-1. Although Quess East Bengal enjoyed 64% possession over the course of the match, Real Kashmir held their nerves to leave the ground with one point.

After Gnohere Krizo put the Kashmir-based side in the driver’s seat in the 33rd minute, Marcos Eusebio Jimenez De La Espada Martin heeled in the equaliser on 75 minutes to provide the Red & gold supporters with some much-needed respite.

From the get-go, Quess East Bengal was looking fluent and were passing swiftly going forward with intent. QEB got the first free-kick of the match on eight minutes but a poor delivery by Juan Mera Gonzales was easily cleared by the RKFC defence line.

The Spanish combination was proving too difficult to deal with by the Real Kashmir backline, within the blink of an eye Gonzales accelerated and was almost through when he was fouled by Ritwik Kumar Das. The foul resulted in the first yellow card of the match in the 14th minute.

Quess East Bengal was attacking from both the flanks but none of the crosses were finding the target man as the away side kept on clearing the ball from the 18-yard box.

Against the run of play, Real Kashmir caught Quess East Bengal defence napping and it was none other than Gnohere Krizo who scored the goal on 33 minutes with a stupendous strike from outside the box.

Quess East Bengal was in no mood to bog down and soon after, they came very near to equalizing from a corner but it was cleared off the goal line by the away team. In the dying moments of the first half, Quess East Bengal got a clear chance when Marcos Espada had an open goal to shoot at but the strike went straight into the hands of Real Kashmir Goalkeeper Tempa Lachenpa.

Real Kashmir FC held onto their slender lead at the end of the first 45 minutes.

The second half started with great intensity with East Bengal launching attack after attack. In the 59th minute, the Red & Golds stitched another opportunity from a set-piece but young defender Mehtab Singh failed to find the back of the net.

In the 67th minute, Alejandro Menendez Garcia made his first tactical change introducing Abhijit Sarkar at the expense of defender Kamalpreet Singh. Finally, the Red & Golds scored the elusive equaliser in the 75th minute when Espada poked a low cross by Juan Mera from the left flank.

Quess East Bengal got a corner ten minutes to the end of the regulation time but a resilient Real Kashmir defence line cleared the header by Juan Mera without much fuss. Juan Mera Gonzalez was awarded the Hero of the Match award for his enterprising display in his first Hero I-League outing.