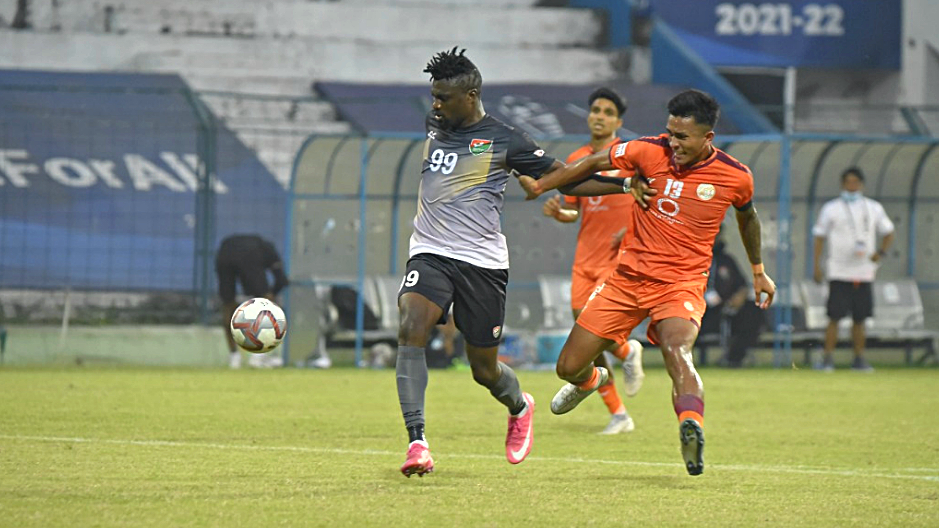 Sreenidi Deccan FC started the game on a high note, continuously pressing high and putting pressure on RoundGlass Punjab in the early minutes. RG Punjab had a chance against the run of play in the 11th minute from a brilliant counter attack started by CK Vineeth but Rupert Nongrum was in an offside position.

Sreedini were controlling the pace of the game and it looked like it was only a matter of time before they found the back of the net. The goal came for them through Nigerian striker Louis Ogana. He took down a long ball beautifully, shifted it on his preferred right foot, and chipped it past the keeper to give Sreenidi the lead.

Ogana had a chance to double his tally within minutes as David Munoz made a great pass towards him inside the box, but the RG Punjab goalkeeper Lalthuammawia Ralte came off the line to snatch it away. David Munoz then had one of the best chances of the game as Lal Chungnunga floated a beautiful freekick in his path, only for the Colombian to put it wide with the goal gaping.

Although Sreenidi were looking well in control, RoundGlass were never too far off. The Vizag based side were unable to finish their chances and RG Punjab capitalized with an equalizer. Aakash Sangwan swung in a great cross and Sumeet Passi scored with a bullet of a header to bring the game to 1-1 in the 39th minute.

The second half began in the same vein as the first. Sreenidi players pressed high in search of a goal right from the start and they got their lead back in the 56th minute with Ogana doubling his goal tally for the game. A beautiful lobbed pass by Hamza Kheir was well taken by Ogana to bring the game to 2-1 in his side’s favour.

It became an end-to-end game in the final 30 minutes with both sides coming close to scoring. Veteran Robin Singh was sent in by RG Punjab in the 77th minute along with Lalchhuanmawia Fanai in search of an equalizer. Seven minutes of stoppage time were allotted to add further excitement to the game. Even with their best efforts, RG Punjab weren’t able to equalize and the game ended with their first loss of the season.