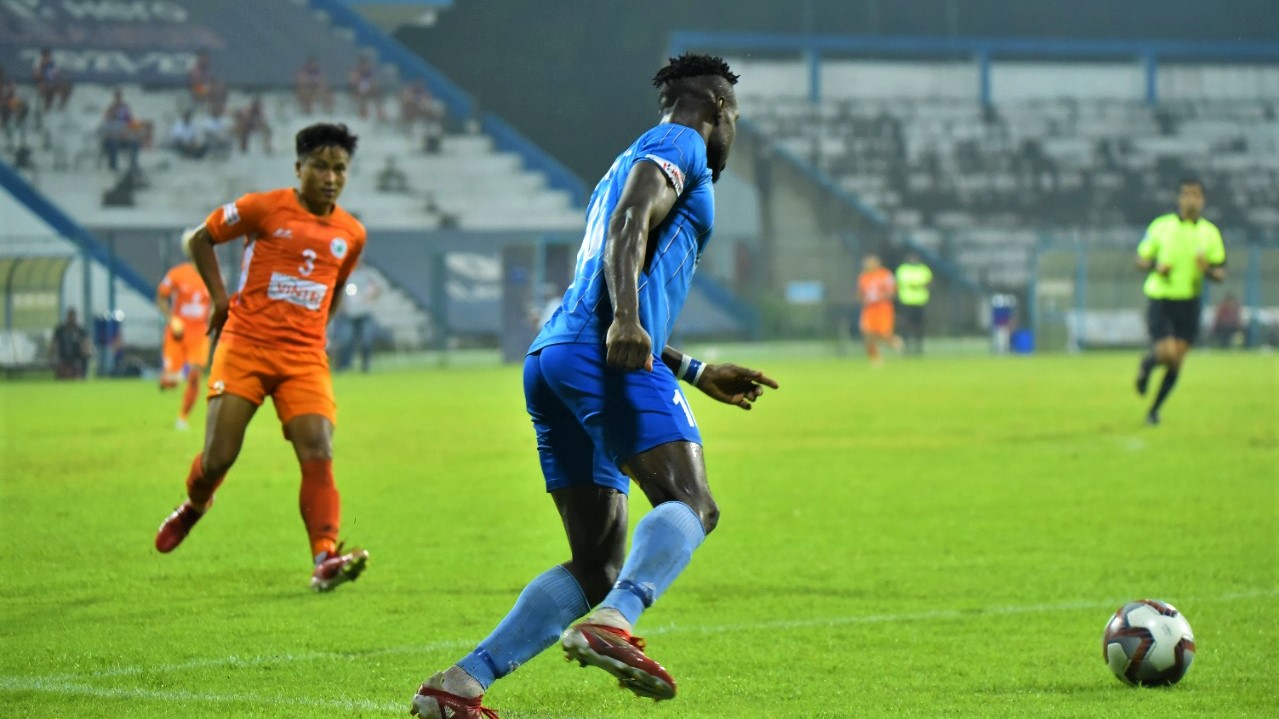 KALYANI: Churchill Brothers missed out on another clean-sheet but snatched all available points against NEROCA FC, here at the Kalyani Stadium. A solid and steady performance by the Red Machines saw them hand the Orange Brigade their third successive defeat.

After a heavy defeat against Gokulam Kerala in their previous encounter, NEROCA made six changes to the side. However, there were still nervous moments minutes into the first half. Quan Gomes’ corner came straight to Momo Cisse. The defender’s header sailed over the bar. At the other end, Sergio Mendigutxia was causing trouble for the Churchill defence on several occasions.

Minutes past the midway point of the first half, Nora Fernandes almost gifted NEROCA a goal spilling the ball in his box. But the keeper was quick to recover before the Orange Brigade could cause any damage. Mendigutxia picked up an unnecessary booking for striking the ball towards goal after the referee had blown his whistle. Around the half-hour mark, Saurav Mandal was denied at the near-post by Prateek Singh.

NEROCA probed forward on multiple occasions as Churchill broke on the counter with Gnohere Krizo. The Ivorian nutmegged Ben Nash before he was brought down on the edge of the box by James Singh, who was tracking back at full speed. Cisse stood over the ball and was also involved in a small scrap with Olen Singh. The incident did not distract the Senegalese as he smashed the freekick home to give Churchill the lead.

Four minutes after the opener, Churchill added another goal to their tally. Gomes’ delivery from the corner came to Richard Costa. Costa’s effort was blocked on the line by Davis Kamanga and the rebound went directly to Kenneth Ngwoke as the Nigerian slotted it past the keeper and defenders to give his side a comfortable two-goal cushion at half-time. Two minutes from half-time, Mendigutxia could have pulled one back but the Spaniard’s header was saved superbly by Nora.

After the interval, NEROCA came out on the front-foot. A minute into the half, Mendigutxia tried to squeeze the ball into the goal with a side-footed shot that was saved comfortably by Nora again. Minutes later, Ngwoke fouled Kamanga as NEROCA were awarded a freekick in a good position. Kamanga struck it beautifully as the ball curled and dipped but only bounced off the crossbar and went out for a goal-kick.

Suresh Meitei was solid inside the Churchill box. However, it was Lamgoulen who popped up with a crucial intercepting header to deny Mendigutxia. Churchill Brothers were dealt an injury blow as Cisse was withdrawn minutes after the hour mark. Just when it looked like NEROCA would exploit a vulnerable Churchill defence, Mendigutxia limped off the pitch clutching his hamstring.

The Spaniard was replaced by Vicky Meitei with fifteen minutes left on the clock. Darker clouds accumulated in the NEROCA sky as they conceded again after Ngwoke bagged his second of the game in the most fortunate manner. Substitute Bryce Miranda played the striker in on goal as Olen Singh’s lunge pushed the ball onto the foot of Ngwoke and it rolled past the keeper into the back of the net as NEROCA were unable to find a glimmer of hope.

Churchill came into this game with only one clean sheet the entire season. Heading into stoppage time, the Red Machines were eager for a shutout. However, Vicky Meitei’s shot from the edge of the box picked up a nasty deflection off Suresh Meitei and crept into the goal as Churchill lost the clean-sheet but nabbed the victory.

The Red Machines stay third in the table, three clear of RoundGlass Punjab. NEROCA FC extended their winless streak to eight games and they will stay at the bottom of the table.