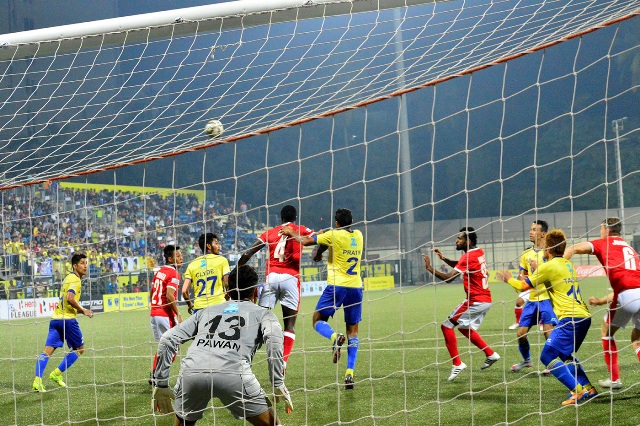 Mumbai FC were unchanged from their 2-1 win over Salgaocar as Steven Dias failed to recover in time for the Bengaluru game. Ashley Westwood made just one change from his side’s 3-0 success against Shillong Lajong as Shankar Sampingiraj came in for 18-year-old Malsawmzuala.

Mumbai FC who were unbeaten against Bengaluru FC in four encounters took a step towards continuing that run when Arata Izumi’s deflected strike rolled past Ralteto hand Mumbai FC an early lead. Bengaluru FC made a mess of an Ashutosh Mehta cross allowing Eric Brown’s blocked shot to fall kindly for Arata Izumi inside the box as the Japanese enjoyed a little bit of good fortune in getting the ball into the back of the net.

There was more rub of the green in store for Mumbai FC as an acrobatic clearance from Min Chol Son just ahead of the half way line looped into the Bengaluru net as Ralte was horribly caught out.

With a 2-0 lead to protect, Khalid Jamil’s side sat slightly deeper in their own half, suffocating Bengaluru’s narrow midfield diamond. There was no surprise that Bengaluru’s first real chance came from a set-piece in the 28th minute when Sunil Chhetri headed just wide of the target from a free kick bombed in from the left flank.

Sunil Chhetri was at the thick of the things once again when he found space in the middle for the first time in the game and almost fed the marauding C.K. Vineeth who was stopped in his tracks by Pawan Kumar was alert enough to collect Chhetri’s through ball ahead of the Bengaluru youngster.

Mumbai FC were forced into a substitution in the 35th minute, when the injured Ashutosh Mehta had to be replaced by Shrikanth Ramu, but it didn’t affect Mumbai’s superiority in the game as a brilliant combination play between Kozawa and Sushil Singh saw the latter run clear on goal, only for the striker to under-hit his shot and allow the goalkeeper to collect.

Bengaluru’s defending in the first half was summed up when John Johnson’s weak clearance fell for Ryuki Kozawa just outside the box and the Japanese striker was inches wide from adding to Mumbai’s tally in the penultimate minute of the first half.

Ashley Westwood who was clearly displeased with his side’s performance made two changes at the break bringing off skipper Sunil Chhetri and Alwyn George for Udanta Singh and Thoi Singh. Bengaluru stepped up the pressure on the hosts at the start of the second half, but Khalid Jamil’s men defended astutely to preserve their 2-0 lead.

Ashley Westwood’s frustrations were compounded when Euseneson Lyngdoh had to come off injured ten minutes into the second half as Malsawmzuala took his place. Mumbai FC were given a real scare in the 72nd minute of the game when a breathtaking run from Udanta Singh opened up the otherwise solid Mumbai FC defence, but the substitute failed to keep his shot down as the chance went begging for the visitors.

Seven minutes later, Udanta Singh once again created the opening after breezing past Clyde Fernandes on the right, but Thoi Singh blazed over from six yards out as Bengaluru FC’s hopes began to diminish.

Bengaluru FC continued to probe the Mumbai FC rearguard but for no joy as Khalid Jamil’s men successfully did the job on Ashley Westwood’s Bengaluru FC claim their first ever win against them. On the other hand, the Mumbai FC bogey continues for the Blues from Bengaluru who saw their lead at the top trimmed to just one point. Mumbai FC moved to the third place in the table with that massive win.