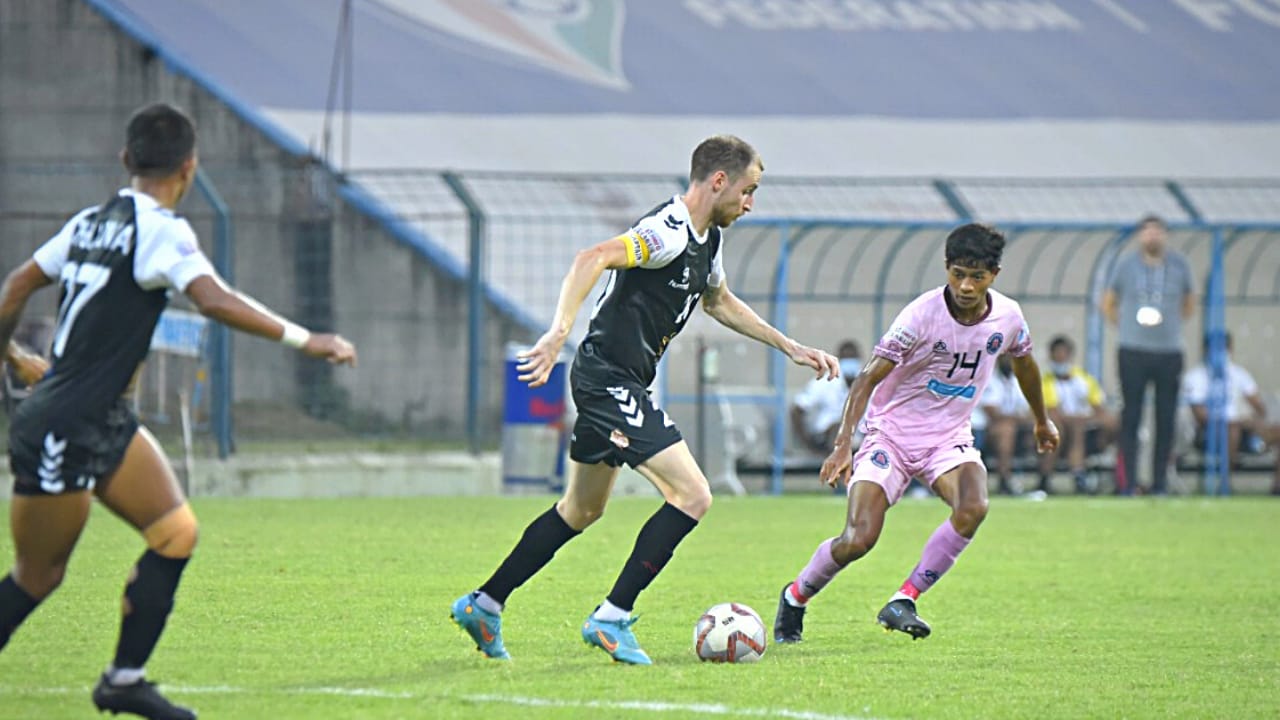 KALYANI: Mohammedan SC warded off a strong challenge from Rajasthan United FC to run out 2 – 1 winners at the Kalyani Stadium on Wednesday. Two first half goals courtesy Azharuddin Malick and Nikola Stojanovic set Mohammedan SC on their way. A stunning free kick from Julian Omar Ramos in the second half set up a nervy final showdown, but Mohammedan SC held their nerve to see out the game and reclaim top spot in the Hero I-League.

Rajasthan United (RUFC) went into the contest boasting the meanest defence in the Hero I-League this season, conceding only three goals from their first eight matches in their debut campaign. Their opponents, on the other hand, posed a fearsome challenge with the likes of the dangerous Marcus Joseph, Nikola Stojanovic and Andelo Rudovic in their ranks.

The Black and White Brigade marched into the ascendancy early in the contest as they took the game to their opponents. Although there were no clear cut scoring opportunities in the first quarter of an hour, the alarm bells were ringing for Rajasthan United as Mohammedan SC stamped their territorial domination on the pitch.

RUFC goalkeeper Bhaskar Roy was called into action for the first time in the 16th minute, and he answered the call with much aplomb. After winning the ball high up the pitch thanks to their constant high press, Stojanovic produced a fierce effort that was destined for the top corner if not for the heroic intervention by Roy. Roy’s acrobatic full stretch dive can easily rank as a contender for one of the saves of the season.

However, Mohammedan SC went on to draw first blood soon after as after neat interplay with his skipper Stojanovic down the right, Brandon forayed into the opposition box and laid the ball off at the feet of Azharuddin Mallick. Under pressure from a defender, the ball broke kindly for Mallick near the 6-yard box as he drilled a low finish past a hapless Bhaskar Roy to send Mohammedan SC into the lead.

Wave after wave of Mohammedan SC attacks placed Rajasthan United under immense pressure, but the newcomers displayed a steely resolve to not let the game slip away from them within the first half.

Mohammedan SC showed no signs of letting up, however. The Kolkata side’s intense high press reaped a reward in the 40th minute. In an attempt to play the ball out from the back, Bhaskar Roy played the ball into the feet of Melroy. Unaware of his surroundings, Melroy got caught in possession by Mohammedan skipper Stojanovic in an extremely vulnerable part of the pitch. Stojanovic rounded the goalkeeper and made no mistake with an easy finish, sending the Black and White Brigade 2 – 0 up at half time.

Forced to take the game to their opponents in search of a result, RUFC tried to build a spell of momentum in their favour and held more possession of the ball at the beginning of the second half. However, after an hour into the game, Rajasthan United were yet to effectively test Mohammedan SC goalkeeper Zothanmawia.

Rajasthan United pulled one goal back in the 70th minute in truly spectacular fashion. With a free kick roughly 25+ yards from the goal, Julian Omar Ramos stepped up and produced a left footed hit which was precise and powerful in equal measure, as the ball rifled into the top corner before Zothanmawia could even react. The goal showed a way back into the contest for RUFC.

With RUFC feeling the wind in their sails, it was time for the Mohammedan SC unit to let their experience come to the fore and snuff out all attempts of finding a way back into the game for their opponents. Mohammedan SC controlled the majority of possession in the remaining 20 minutes and defended solidly to hold on to their one goal lead and climb back atop the standings in the Hero I-League.