Matchweek 1 Review: Glut of goals and a hat-trick hero 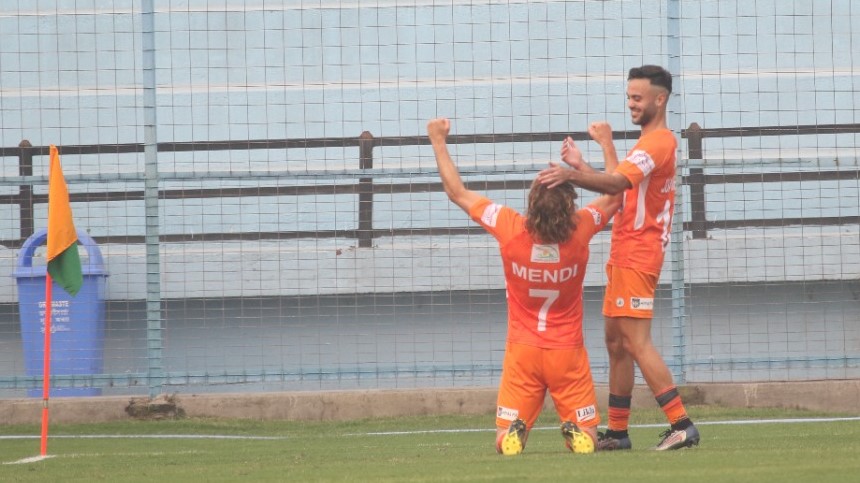 KOLKATA: The Hero I-League got off to an entertaining start with as many as 16 goals scored over 6 games. New boys Sreenidi Deccan FC and Rajasthan United FC had a difficult start to life at this level while NEROCA and Real Kashmir gave a glimpse of their attacking prowess.

Defending champions Gokulam Kerala and contenders Mohammedan Sporting posted measured with TRAU and Indian Arrows playing out the only draw of the round.

A goalless draw at the Mohun Bagan Ground kicked off the Hero I-League season as TRAU were unable to find a way past the rigid Indian Arrows defence. Goalkeeper Ahan Prakash pulled off some solid saves to earn the Hero of the match and a deserved point for his side.

In the blockbuster clash of the matchday, reigning champions Gokulam Kerala ran out 1-0 winners over title rivals Churchill Brothers. A first-half penalty by skipper Sharif Mukhammad made all the difference for Vincenzo Alberto Annese’s side in a tight encounter played at the Kalyani Stadium.

RoundGlass Punjab registered a dominating two-goal win over newly-promoted side Rajasthan United at the Kalyani Stadium. Goals from striker Kurtis Guthrie and 17-year-old Aphaoba Singh handed all three points to the team coached by Ashley Westwood, who is back in the Hero I-League after almost six years.

Real Kashmir kicked off their fourth season in the Hero I-League with a riveting 3-2 win over Aizawl FC in Kalyani. A debut brace from Brazilian striker Tiago Adan and a goal from captain Mason Robertson led the Snow Leopards to three points. Yan Law’s Aizawl gave a good account of themselves with an all-Indian line-up.

One of the title contenders, Mohammedan SC made the perfect start to their Hero I-League season with a 2-1 victory against a young Sudeva Delhi side. Star striker Marcus Joseph netted arguably the goal of the matchday with a glorious curling effort into the top corner. Sudeva collected a consolation goal towards the end with Abhijit Sarkar’s fantastic volley.

Right foot, left foot, header – it was a perfect hat-trick for Neroca’s new signing Sergio Mendigutxia in their opening match win over Sreenidi Deccan. The pick of the bunch was his third goal, a sublime first-time dink over the keeper from the edge of the 18-yard-box. The Spanish striker announced his arrival in India with an awe-inspiring display on debut.