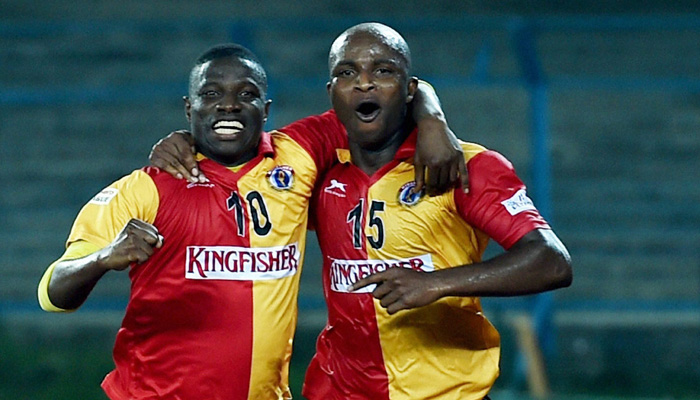 KOLKATA: An upbeat East Bengal side will host a tattered Mumbai FC in an I-League game to played before empty stands at the Salt Lake stadium on Saturday evening.

The hosts are high on confidence after convincingly winning last three of their fixtures which also include an AFC Cup match. The Red and Golds bagged full six points from their Pune tour before thumping Balestier Khalsa with a second string side.

Keeping faith in the high-profile striking duo of Ranti Martins and Dudu Omagbemi has finally paid dividends for the Dutch tactician Eelco Schattorie, as both of them have been in fine goal-scoring form of late. While Ranti is still leading the charts with 14 goals, Dudu has scored 3 goals in the last couple of matches to take his tally to 4.

Leo Bertos, the marquee player of the side has finally started to perform as per the expectations and that has changed the complexion of the side. A struggling midfield has been aided by the class of the former Kiwi world-cupper while Cavin Lobo has also dazzled in the last couple of league games. The only headache for Schattorie will be the absence of Lalrindika Ralte, who is still sidelined owing to an ankle injury.

Eelco will make wholesale changes to the side from the XI that started in the continental competition on Tuesday, bringing back all his first-team players.

Mumbai FC have been win-less for the last six matches and have been rocked twice in the last 24 hours. While the AIFF disciplinary committee banned midfielder Dane Pereira for doping, the governing body later came up with a verdict that will see gaffer Khalid Jamil being suspended for the next four games.

“It won’t be a problem if I am not in the dugout. The players are matured enough to carry out their responsibilities,” Khalid told the reporters before the match.

“They are playing well recently because their front two Dudu – Ranti has finally clicked. I am satisfied if I get a point while three points will be a very good result but we have to play good football for that,” he further added.

The team will be depending heavily on the two foreigners in Josimar and Taisuke Matsugae, who have been the most dangerous players for the opposition defense. Josimar, the seasoned Brazilian is also the highest scorer for the outfit having scored 5 goals already.

Quite surprisingly, Mumbai FC have a superior head to head record against the Kolkata giants in the last five matches as they have won a couple of ties compared to East Bengal’s one. A win in this match can take the hosts to the third position in the table, while three points from this match will give Jamil’s boys some breathing space amidst the off-the-field controversies and mid-table struggles.