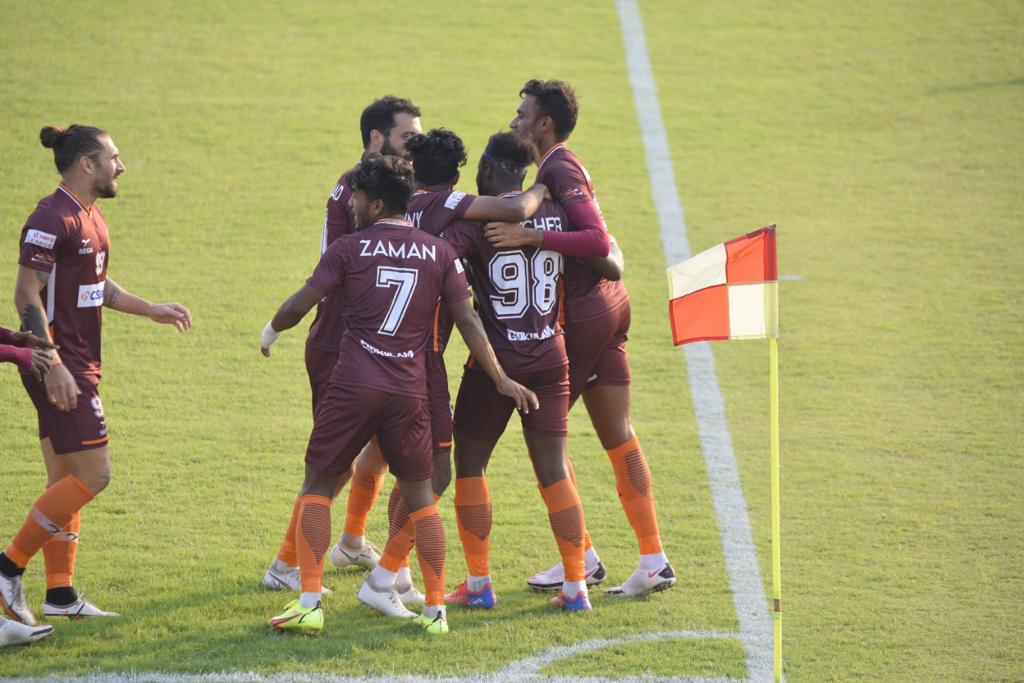 KALYANI: Gokulam Kerala picked up a solid 5-1 win over Real Kashmir in Hero I-League 2021-22 match on Monday at the Kalyani Stadium. Luka Majcen (4′, 38′), and Jourdaine Fletcher (5′, 27′) scored a brace each, while Jithin (66′) score one goal against the 10-man Real Kashmir, as the trio helped their team earn three points in the thrilling contest. Tiago Adan (48′) scored the sole goal for Real Kashmir in the match, but it proved not be enough to inspire a comeback.

Gokulam Kerala started the match in a thrilling fashion as they made a quick penetration inside Real Kashmir’s box. Prakash Sarkar handled the ball inside the six-yard box after a deflection from the goalpost and was given a straight red card, as Gokulam Kerala earned a penalty in just the third minute of the match. Luka Majcen converted the kick from the spot to give Gokulam Kerala a 1-0 lead.

In less than a minute, Gokulam Kerala doubled their lead, with Jourdaine Fletcher hitting a left-footed shot towards the right bottom corner of the goal. In the 8th minute, Abhash Thapa brought down Gokulam Kerala forward just outside the box and received a yellow card for the foul. The ensuing free kick, taken by skipper Sharif Mukhammad, just went wide off the goalpost.

The 10-man Real Kashmir continued to feel the pressure as the defending champions made dangerous moves inside their half. In the 27th minute, Abdul Hakku provided a beautiful pass to Jourdaine Fletcher who netted it in once again to make it 3-0 for Gokulam Kerala. Two minutes later, Abhash Thapa denied Fletcher his hat-trick as he cleared the ball from the goal line.

In the 38th minute, Luka Majcen also scored his second goal in the match after an error from Real Kashmir’s defence saw the ball landing on the Slovenian’s left foot. Majcen made no mistake and handed his team a four-goal lead with ease. At the stroke of halftime, Tiago Adan hit a left-footed shot from outside the box, but it just went wide and the opportunity for Real Kashmir was missed.
The second half started with Thahir Zaman conceding a penalty. Tiago Adan converted the kick from the spot to open the scoring for Real Kashmir. The goal inspired Real Kashmir to make dangerous moves inside Gokulam Kerala’s box. In the 55th minute, Emil Benny hit a left-footed shot from outside the box, but it was just tipped over by Real Kashmir goalkeeper Bilal Khan. The ensuing corner was cleared away by the defence with ease.

Emil Benny, who was looking very threatening in the defensive third, made a delightful pass to Jithin in thr 66th minute, who struck a half-volley on the bottom right corner of the nets to add the fifth goal for Gokulam Kerala FC. Three minutes later, Fletcher was cleared to get inside the box on a counter-attack. But his feeble wrong-footed shot was comfortably saved by Bilal Khan.

With 15 minutes left on the clock, Real Kashmir decided to sit deep in their own half to prevent any further damage to the scoreline, and search for opportunities to surprise the Malabarians with counter-attacks. Rohmingthanga managed to get a shot on target in the 80th minute but goalkeeper Rakshit Dagar deflected it away.
With a minute left in the regulation time, Samuel James got away with a left-footed shot but he was denied by the woodwork. In the injury time, Real Kashmir continued to search for the second goal, but could not find any, and Gokulam Kerala won the encounter 5-1.

Gokulam Kerala FC will next face off against Kenkre FC on March 12, 2022, while Real Kashmir FC will take on Sreenidi Deccan Football Club on the same day.