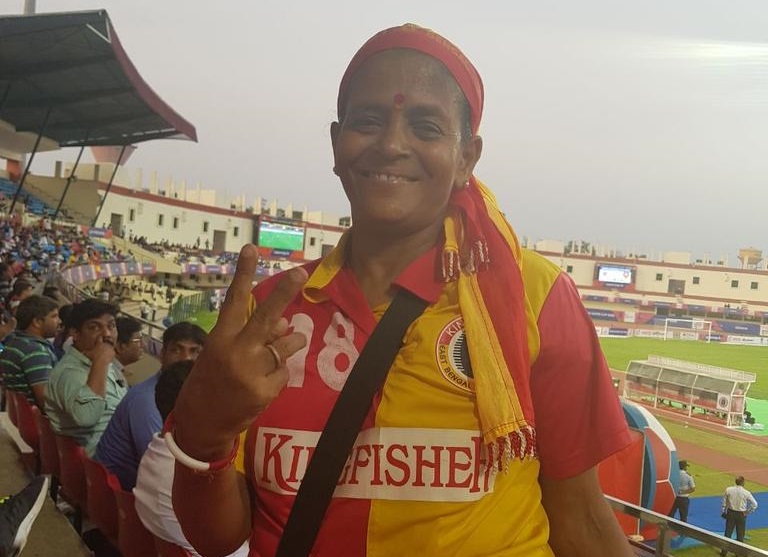 CALICUT: A strong feeling deriving from one’s circumstances in tandem with mood and relationships with others can be defined as an emotion. A spark in the brains of sorts or perhaps a hit of serotonin – a chemical responsible for happiness fused with a deep-seated emotion can easily give birth to euphoria.

When an elderly woman in her 50s, runs with a spring in her steps and a twinkle in her eyes, faster than the soap operas of Bollywood, to catch a glimpse of the cause of her serotonin hit, euphoria falls short to describe the moment. Carrying with her a handbag stuffed with candies, her serotonin hit, apprehensive of her, does not hold back and immediately grips her in a passionate embrace.

“East Bengal is the reason for my happiness. It does not matter if they win or lose, the love of the club is something that I cannot describe in words,” explains Jamuna Das. “I have been supporting East Bengal since the days I began to comprehend the game of football. I have been supporting the club since I was a young girl and the memories that I have created watching them play are some of the fondest memories that I have.” Some might know her as ‘Lozenge Masi’.

Ever present in the stadia when East Bengal are playing, ‘Lozenge Masi’ is famous for giving candies to the Red and Gold players after matches.

“The name just stuck to me”, she says. “I sell lozenges to earn my daily bread, but what’s the harm if I go and sell them at East Bengal games, to my fellow East Bengal fans? That way, I can give whatever I have to the club. I always say that after my husband, the next biggest thing that I love is East Bengal.”

Almost all the players know ‘Lozenge Masi’. A smile carves upon the face of some when seeing her across the barricades, apprehensive of the acknowledgement getting from an elderly lady, still passionate and effervescent about football like when she was twenty.

“Whenever our boys go out onto the pitch it feels like my kid is going to sit for the board exams. I have a very cordial relationship with the players. It’s like we are mother and son, or brother and sister.”

If East Bengal win the Hero I-League title on March 09, given Chennai City loses to Minerva Punjab and the Red and Golds win against Gokulam Kerala FC, ‘Lozenge Masi’ will be “overfilled with emotion”

“I do not believe in offering sweets in temples, but I do believe that God answers whenever someone asks Him for help. I have been praying day and night in the hope that we win the I-League on Saturday. I believe God will answer my call. We may be behind Chennai, but we will win tomorrow. Mark my words,” she proclaims.

“The last time we won the domestic league was in 2003-04 and after more than 15 years, if we win the trophy, it will be a very special occasion for me and my family,” after a pause she adds. “Imagining it gives me goosebumps. It will be a dream become reality.”

As the serotonin hits her further imagining the moment, her eyes light up like a Christmas tree, muscles tense, as if, if given the opportunity to play tomorrow, she might go on to score the goal that hands East Bengal the trophy. But at this moment, her dreams can only fuel her emotions and passion more towards a club that she has supported since she was a child.