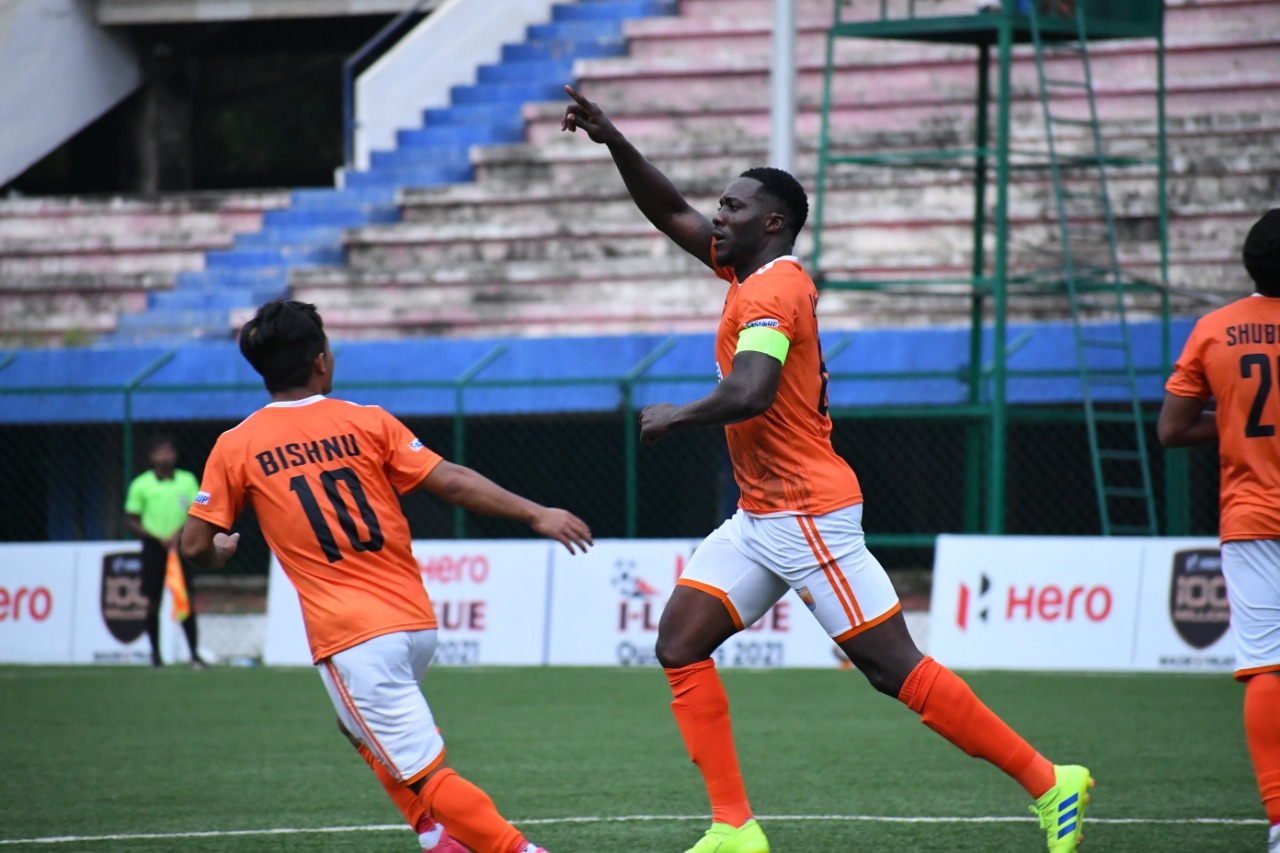 BENGALURU: Nigerian centre back Loveday Okechukwu scored in the dying minutes of the game to seal a slender 1-0 win for Madan Maharaj FC over Ryntih SC. Ryntih SC dominated proceedings for the majority of the contest, but were left to rue their missed opportunities as the experienced Madan Maharaj side held on through adversity to snatch a late winner in the game at the Bangalore Football Stadium. The defeat ensured that Ryntih SC will no longer be able to qualify for the final round of the Hero I-League Qualifiers.

After a tenacious start from both teams where neither side was willing to give an inch, the first moment of concern came in the 19th minute from a wide free kick for Ryntih SC. As Allen Lyngdoh swung in a cross from the right wing, Madan Maharaj FC needed all hands on deck to clear the danger. This sight of goal boosted the Meghalaya club’s morale, as Ryntih SC produced their first shot on target through Chesterpoul Lyngdoh just moments later. Lyngdoh found himself in a yard of space in a central position outside the penalty box, but his left footed shot went straight into goalkeeper Shayan Roy’s grateful hands.

The next bright spark of the match came in the 24th minute when Carlos Challam set off with intent on a searching run inside the box before being nudged off the ball by opposition forward Amarendu Chakraborty. The referee saw no foul play and waived off all penalty appeals from the Ryntih SC touchline.

Chesterpoul Lyngdoh found himself in sight of goal again in the 25th minute when he got on the end of a cross from Allen Lyngdoh. Chesterpaul was left completely unmarked near the penalty spot, but it proved to be a difficult chance to convert as the forward had to bend far too low to generate power and direction in his header. 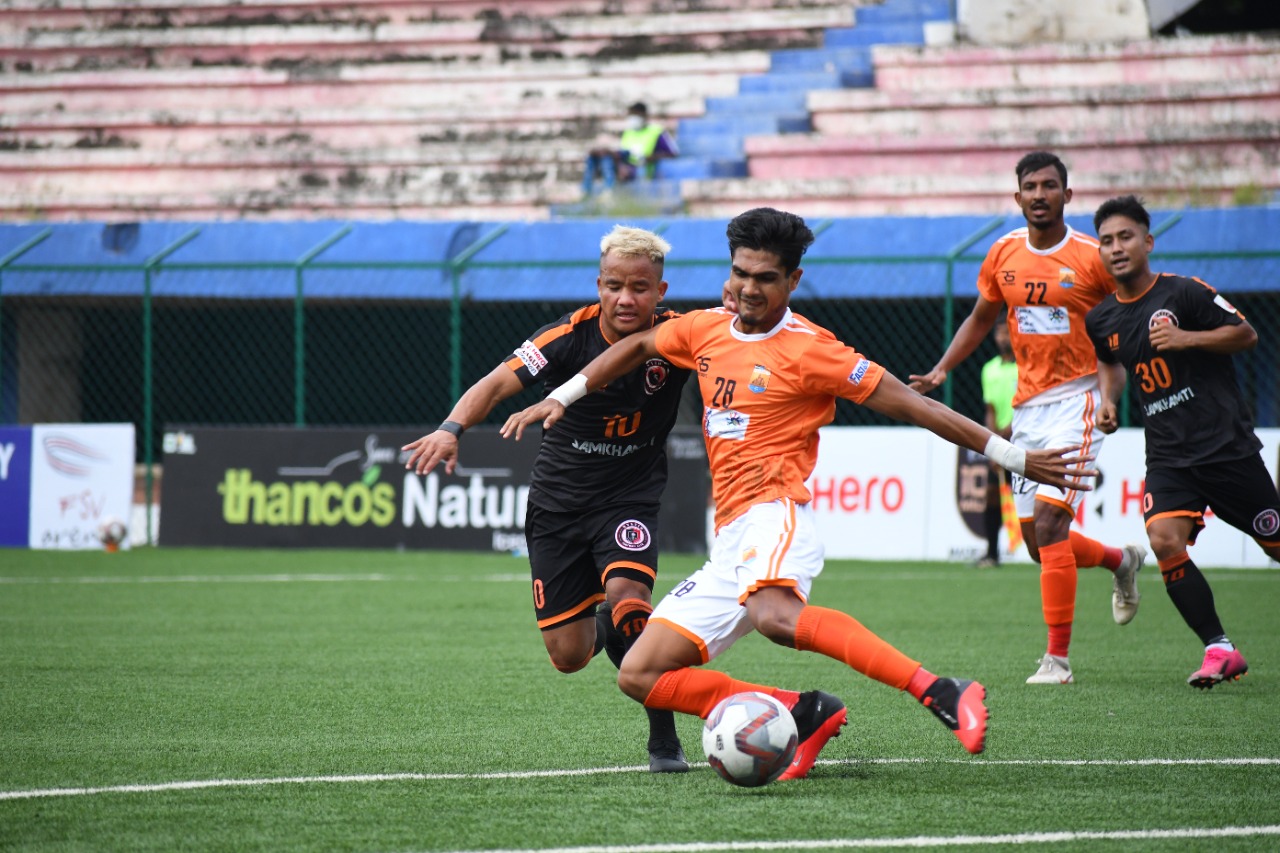 Ryntih SC earned a freekick in a promising position in the inside left area in their attacking third in the 33rd minute. Sheen Stevenson stood over the dead ball situation and aimed for the far post, but his shot took a deflection off the wall and flashed past the post. Both teams went into the dressing room at half time on level terms.

After the restart, the best goal scoring opportunity of the match thus far fell Chesterpoul Lyngdoh’s way. Allen Lyngdoh swung in a peach of a cross with his left foot, and the ball somehow found its way over to the head of the shortest player on the field. Chesterpoul ran on to meet the ball with a perfectly timed late run, but he took his eye off the ball at the last moment and could not keep his header on target to give his side the lead. Although Chesterpaul Lyngdoh missed some chances in the first hour of the match, the diminutive forward had been a threatening presence in attack for the team from Shillong.

Madan Maharaj FC’s first chance came in the 64th minute after substitute Jiten Murmu produced a moment of magic to flash past his man down the right flank. He was brought down by Kenstar Kharshong, and the free kick resulted in a good shooting opportunity for Bishnu Bordoloi. Bordoloi produced a lacklustre effort that was blocked by the Ryntih SC defence.

MMFC grew into the game slowly as the contest neared the full time whistle. Jiten Murmu had an opportunity to score in the 78th minute when he met a cross that came in from the left wing, but he could not keep his effort inside the goalposts.

As the game inched towards the final whistle, there was an increasing sense that one goal might be enough to decide this closely fought tie. That proved to be just the case as Madan Maharaj FC’s Nigerian centre back Loveday Okechukwu at 90th minute rose highest from a set piece to send a looping header over Ryntih goalkeeper Neithovilie Chalieu. The goal came at the perfect time for MMFC, who were wary not to let their lead slip away on this occasion as they oversaw the final few minutes without much difficulty to seal a 1-0 victory and join Rajasthan United FC at the top of Group A with four points from two matches. The defeat dashed Ryntih SC’s qualification hopes with one match still left to play.