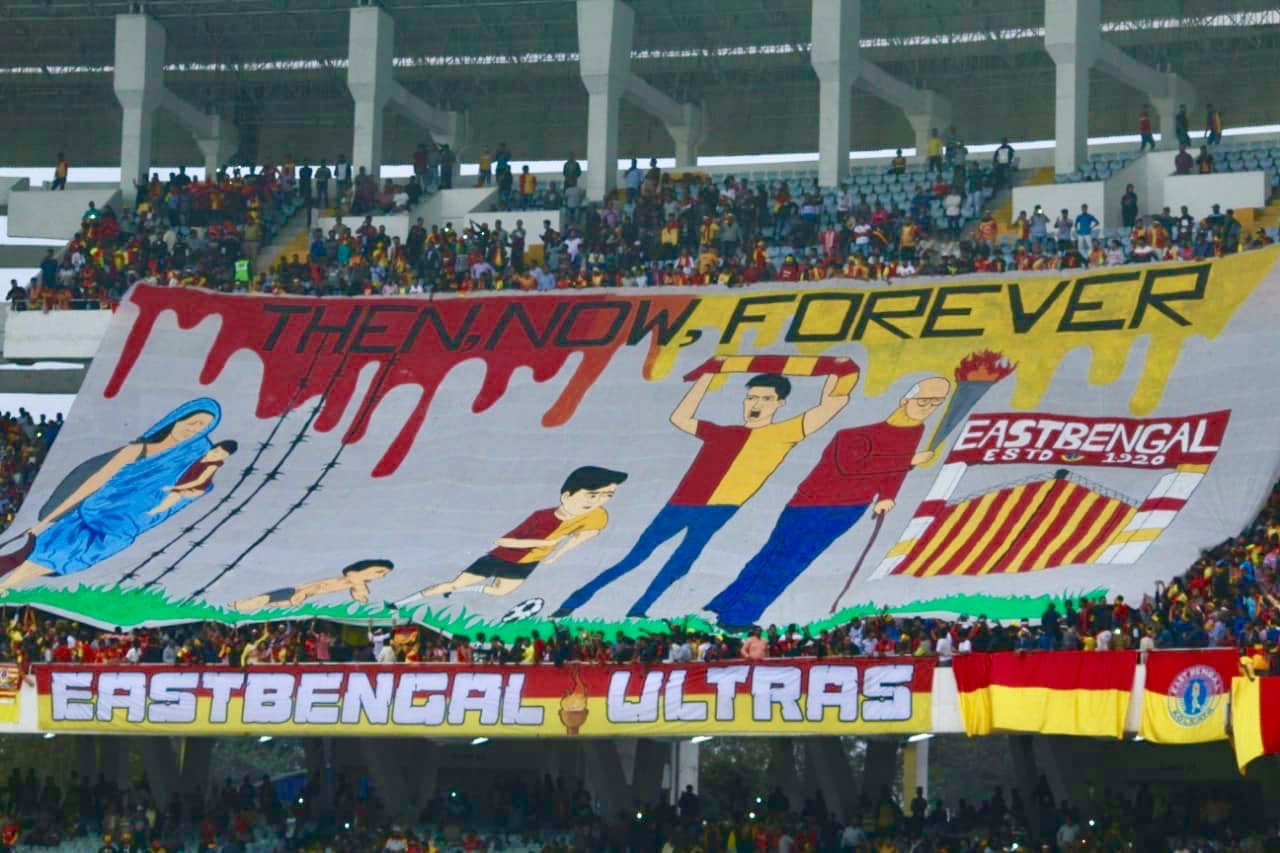 KOLKATA: Indian Football has always been known in not only Asia but also all over the world for the famed Kolkata Derby. Over the years, the two clubs have been through the ups and downs of local, national and even international football, carrying their names far and wide. What makes these two clubs so special is their fanatical supporter-base, as fans throng to the galleries in their thousands to show their support for their favourite side in what is a “fight for pride” for both sets of fans.

The upcoming Hero I-League match between Mohun Bagan and Quess East Bengal promises to exhibit much of the same excitement, fervour, and colour on Sunday (January 19, 2020) at the Vivekananda Yuba Bharati Krirangan in Kolkata.

A rather new evolution in Indian fan-culture has been the use of tifo and innovative chants from the stands in order to pep-up their respective teams. Indeed, it was in last season’s Hero I-League that the Red and Golds unfurled a banner depicting a pictorial word-play on a certain chant directed towards their counterparts. In return, the Mohun Bagan supporters unfurled a tifo that urged their players to ‘Take no prisoners’ in the 2019 CFL Derby.

“The supporters’ culture that is now growing in Indian Football has been going around for the last 4-5 seasons. We have all seen how a strong supporter-base helps clubs in countries like Italy, Russia, or Spain,” says Prasenjit Sarkar of the Mariners Base Camp, a supporters group of Mohun Bagan.

The tifo culture is perhaps one that is rather new to Indian football — an influence that comes down from Europe and taken up by the fans who have grown-up watching the picturesque shows put on inside the stadiums by the fan-groups of clubs like Inter Milan, Borussia Dortmund, Red Star Belgrade, Dynamo Zagreb and many more. And with the Kolkata Derby coming up, the efforts are always put into motion to bring out the best displays for the Boro Match.

While the two teams fight it out on the pitch, fuelled by all the emotion that surrounds them, there is another competition going on in the stands.

“Obviously, it’s a competition but the competitiveness should remain restricted on the pitch itself,” Dutta said. “The fans of both sides are crazy about the game and that is the beautiful thing that we all want to see during a derby.”

Sarkar, on the other hand, believes that there is a sacred bond between the players on the pitch and the fans in the stands — a correlation that is often reflected in how menacing the messages from the galleries are and the result on the pitch at the end of the day.

“Our main motive behind the tifo is to lift the morale of our players while shattering that of the opponents. We have seen the effect of that in the previous derbies and our intent remains the same ahead of the upcoming one,” he said, revealing that the Mariners Base Camp intends to unfurl 6,000 square-foot tifo on Sunday, December 19, when Mohun Bagan host Quess East Bengal in Kolkata.

“Even when the chips are down, they can find the courage within themselves to climb back from the jaws of defeat and snatch the wins, if we give them the proper support,” he further said.

The East Bengal Ultras have also been hard at work ahead of the Boro Match and had around 30 people diligently working away on their tifo for nearly 20 days. Rishabh Bhowmick, who is also a part of their supporters’ group, revealed the intensity of the effort behind their tifo.

“Making tifos has become a very planned affair nowadays. We have small organised teams behind them, and that has really helped us put out some good results in the past. We have a designing team, an execution team, a painting team – all quietly working away for the last 20 days or so,” he said.

At the end of the day, it comes down to a matter of pride for the two sets of supporters whose lives are perhaps intertwined in every aspect except one – the Beautiful Game. Friends who find themselves on opposite spectrums stop talking to each other on the days leading up to the Derby. A victory would entail the distribution of everyone’s favourite rosogollas next day in office, while a defeat would mean a quiet few days.

“The Derby has become an integral part of Bengali culture. It not only divides Kolkata, but it also splits the entire West Bengal down the middle. We may still call it the Kolkata Derby, but even people sitting in places like Durgapur, Birbhum, Siliguri, and many such places have also picked their own sides,” said Sarkar.

At the end of the day, however, it is not the three points that these fans are craving for. “It is a fight for our pride,” claimed both sets of supporters.