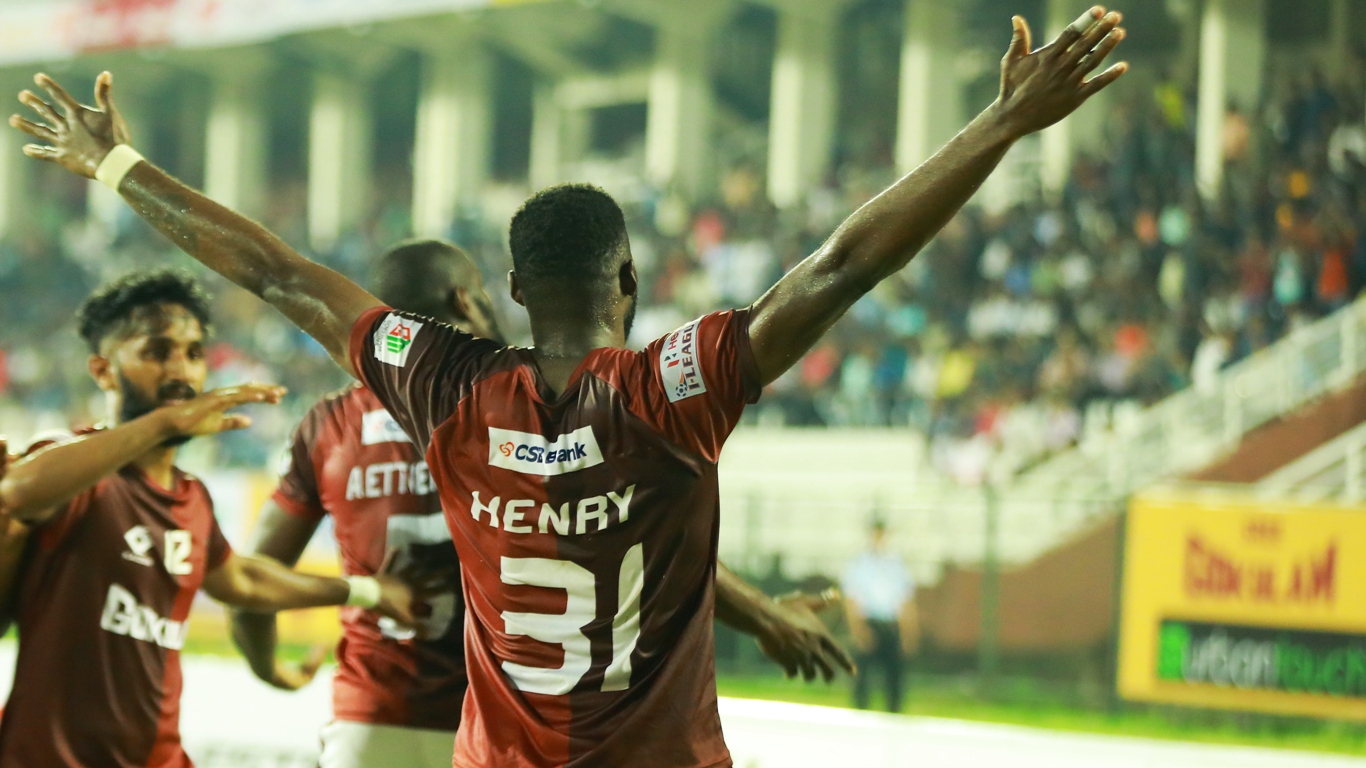 Kozhikode, November 30, 2019: In front of a packed audience of 31,184 home fans, Gokulam Kerala got their Hero I-League 2019-20 season underway on a positive note by pulling off a 2-1 victory over Manipur’s NEROCA FC at the EMS Corporation Stadium in Kozhikode on Saturday (November 30, 2019).

Goals from Henry Kisekka in the 43rd minute and Marcus Joseph in the 49th minute almost took the home side to victory before Taryk Sampson pulled one back for the visitors late in the game.

Both returning coaches fielded a line-up signalling attacking intent. The spearheading duo of Marcus Joseph and Henry Kisekka, to nobody’s surprise, featured in the Starting XI. Trinidadian Andre Etienne started in defence with Nathaniel Garcia in the heart of midfield.

It was the home side that dictated the tempo of the game right from the kick-off whistle. With rigid pressing and stitched passes, Gokulam were looking to make the most of their attacking arsenal.

They had a golden chance to take the lead in the 16th minute when a cross from the left flank found Kisekka, who had a free header to capitalize on, but his effort was off the mark. The Ugandan, along with Marcus Joseph, remained a constant threat throughout the game.

In the 35th minute, Marcus Joseph had a free-kick which he attempted shoot under the wall, but it ricocheted off the defence and fell at his feet again, which he attempts to volley but his effort missed the mark by a whisker, sailing over the crossbar.

The deadlock was broken in the 43rd minute, when Henry Kisekka’s left-footed effort from close range found the back of the net to send Gokulam in front, going into half-time.

The second half began the way the first half had ended in. In the 49th minute, across from the right flank found Marcus Joseph inside the box and he made no mistake in scoring from the open header to double the home side’s advantage.

Against the run of play, NEROCA finally pulled one back in the 88th minute. An acrobatic bicycle kick from Taryk Sampson off a set-piece gave the visitors a lifeline but it turned out to be nothing more than a consolation. The Malabarians earned all three points to get their season underway on a positive note, following up from their Durand Cup-winning pre-season form.

Marcus Joseph was declared the Hero of the Match.