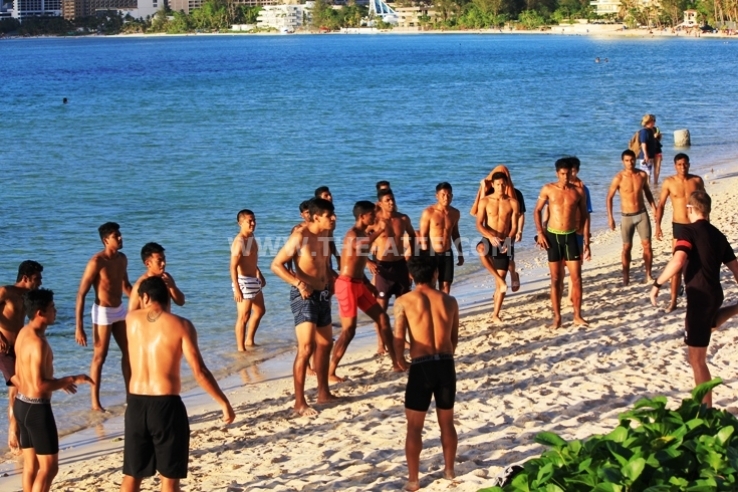 GUAM: Guam is a scenic and small island, perhaps, even smaller than Dwarka (in New Delhi) in size. The reef is turquoise blue and the Pacific, at a distance, despite its might, looks deceptively calm. It’s a holiday destination and almost everyone else is heading to the Beach for a tan, a swim and lots of beer.

The Indian National Team did have their moments on the Beach too, twice in fact so far. If Sunday (June 14) morning was a stroll post breakfast, Saturday (June 13) afternoon was for pure business.

“It was a very long trip. We spent a lot of time in the air and it was very tiring,” National Coach Stephen Constantine told www.the-aiff.com.

The Team spent some 16 hours in the air and landed in Guam after some 27 hours after leaving Bengaluru.

“The body needs to adapt to the different surroundings, the jet lag is always there and obviously, there’s a change in the time zone as well. So when we arrived, the temptation was there to go and rest. But it was very important to train and hence, the moment we checked in, we changed and went straight to the Beach,” Constantine added.

“We did some core stability exercises, some running and lots of stretching. The reason for that was that we didn’t want the Players to go to sleep immediately and wanted all to get a good sleep in the timeframe where we are.”

The Indian National Team had their first training session on Sunday afternoon.

“It was a nice session. It’s an artificial surface and we worked the ball around getting a feel of the pitch,” Constantine added. “It’s important that we adjust to everything, and fast.”