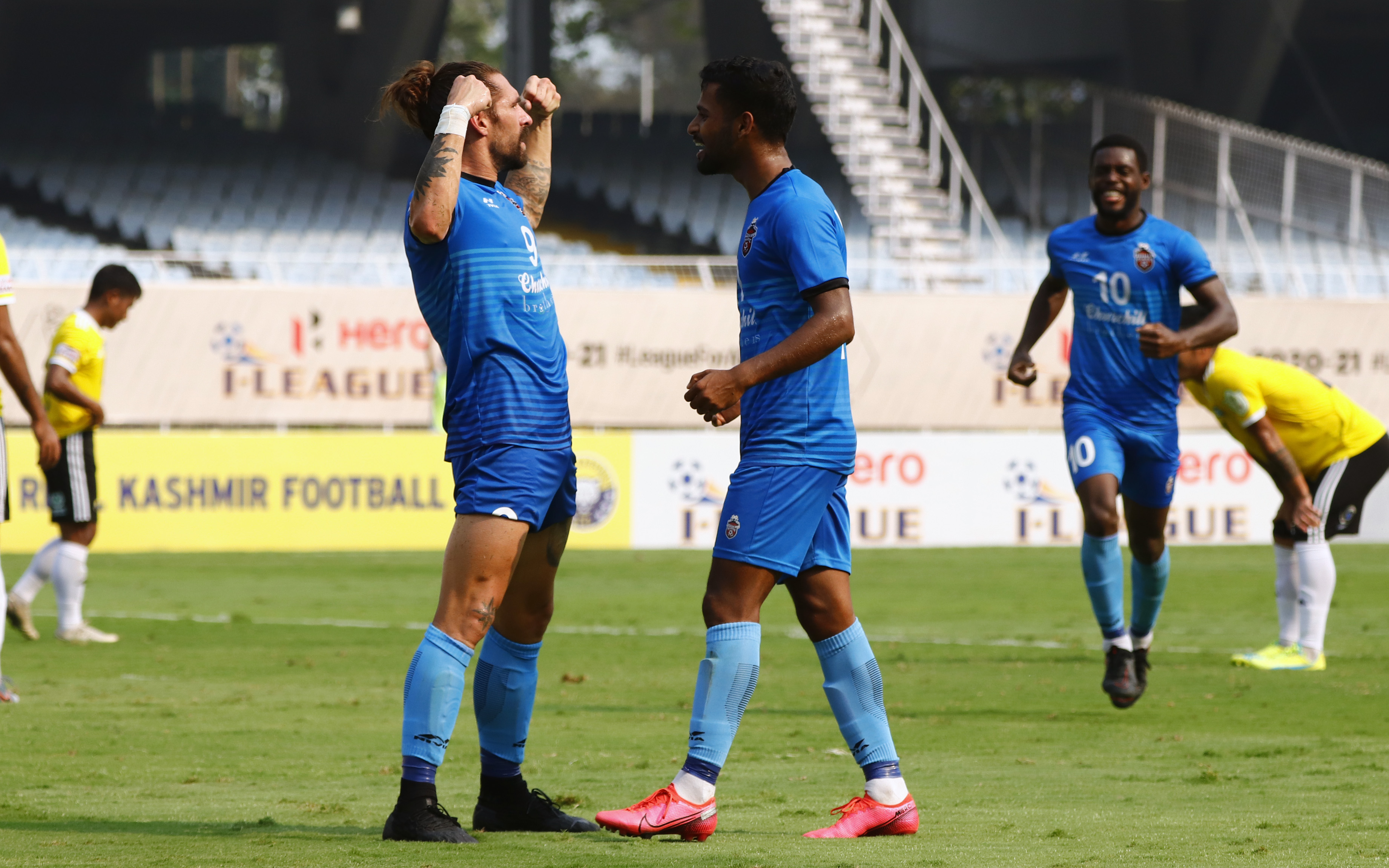 KOLKATA: Fredsan Marshall’s strike in injury time at the end of the second half led Churchill Brothers to a 2-1 win over Real Kashmir FC at the VYBK in Kolkata, West Bengal today (March 05, 2021), as they extended their lead at the top of the Hero I-League standings. After Lukman Adefemi’s second-half strike had cancelled out Luka Majcen’s first-half goal, Marshall’s long-range screamer proved to be the difference between the two sides.

Not wanting to concede an inch in the title race, Churchill Brothers played the first half explosively where the Red Machines restricted Real Kashmir FC mostly in their own half and could have led by at least three goals to nil. Real Kashmir failed to make even a single goal-scoring opportunity in the half, such was the dominance of the Red Machines.

Fernando Varela’s side could have taken the lead as early as the 2nd minute when Clyavin Zuniga combined with Luka Majcen to go clear onto goal. Zuniga however, failed to make the most of his chance and slotted wide of the goal as the opposition goalkeeper rushed out to narrow the angle.

With Churchill Brothers dominating possession and the tempo of the play, Real Kashmir relied on their solid defending and rarely moved forward through counters and long balls. But, Churchill almost seemed to be inspired form in the first half. Once again, Zuniga came close to giving the Red Machines the lead in the 20th minute when his shot from close range lacked power and was easily saved.

The attacking duo of Zuniga and Majcen upfront gradually gave the Snow Leopards defence a lot of trouble. In the 35th minute, Zuniga went on a solo run and dribbled past two challenges, only to force the goalkeeper into making a good save.

All the attacking momentum reaped dividends for Churchill Brothers right at the stroke of half-time. A long ball by Vinil Poojary that took a heavy deflection led Haroon Amiri to make an error as he failed to clear the ball that fell pleasingly to Luka Majcen. Clear on goal, Majcen slotted past a hapless opposition goalkeeper to take Churchill Brothers into half-time leading 1-0.

If the first half belonged to Churchill, the second belonged to Real Kashmir FC. The Snow Leopards started quick off the blocks, spurred by conceding late in the first half. A Chesterpaul Lyngdoh goal was denied in the 54th minute courtesy of the referee flagging the play for an earlier foul. However, the Snow Leopards sensed blood and went head-first to grab points.

In the 57th minute, goalkeeper Shilton Paul made a good save to deny Mason Robertson’s header from close range after the lanky Robertson was found by a well-timed cross by Pratesh Shirodkar. Five minutes later, Danish Farooq’s volley from inside the box was heroically cleared by substitute Richard Costa as Real Kashmir pushed aggressively for the equalizer.

In the 67th minute, Lukman Adefemi produced an absolute stunner to grab the leveller for Real Kashmir. Adefemi, who has been in red-hot form recently — scoring multiple goals over the last couple of matches, edged past Joseph Clemente and with his outside of the boot connected to a cross from the right flank. The volley went crashing into Shilton Paul’s net as the scoreline read 1-1.

Real Kashmir’s direct style of play gave the Churchill Brothers some trouble in the latter stages of the match but eventually, the Red Machines kept out the Snow Leopards away from goal. After the equalizer, half chances for both teams were not capitalized upon as both contingents tried to play safe in an effort to gather a point.

However, Churchill Brothers substitute Fredsan Marshall had other plans. In second-half stoppage time, the midfielder ran on towards goal and with the opposition defence backing out from tackling, his shot from distance crashed into the bottom right corner, proving to be the winner as the full-time scoreline read 2-1 in Churchill’s favour.