I Have A flexible Yet Painstaking Manner With Absolute Clear Views: Malky Thomson 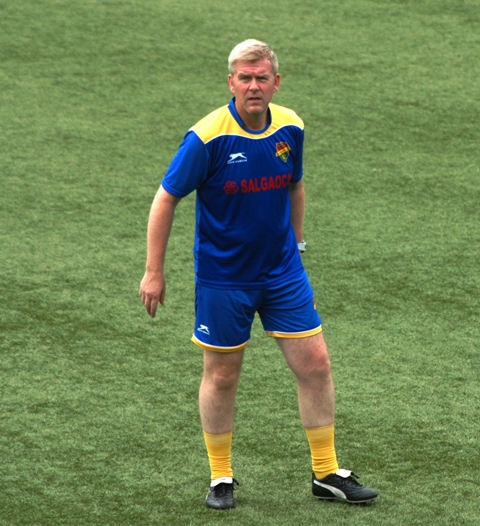 NEW DELHI: Malky Thomson, a person with sheer knowledge and shrewd technical acumen, takes the charge of Salgaocar FC ahead of the upcoming Hero I-League season.  The Goan outfit, who didn’t enjoy a merrier ride through last Hero I-League season, were gasping agonizingly till the last fixture while they somehow got the better of local rival Dempo SC to sustain in the top flight of football. Salgaocar top brass, while finding a respite from the hullabaloo, knocked at Malky’s door who eventually inked the contract with the veteran Goan club who won the I-League back in 2010-11.

Malky Thomson amassed loads of experience having coached notable Scottish clubs in the likes of Celtic, Rangers, Dundee United, Inverness. He was at the helm of Blackpool FC and Birmingham City too for a considerable period. Having arrived to Goa a few days back, Malky has already hit the ground to sharpen the squad for the upcoming season. Nevertheless, Malky, the jovial person with prudent expertise, took his time out for www.i-league.org and vented out candidly his game-reading, long term planning et al.

What approach would you adopt so that players would feel at home with your style?
While it comes managing a group, I have a flexible yet painstaking manner with absolute clear views. First of all, I have to sit with the players face-to-face to understand their approaches. The players must feel an urge to outplay the opponents while hitting the ground. My primary responsibility would be to keep the process run amicably.

Scottish chaps Darryl Duffy and Martin Scott already arrived for pre-season. Salgaocar FC confirmed their partnership with Celtic FC, a Scottish giant. Are we going to watch an Indian outfit in Scottish moulding next season?
Not necessarily. We have to embrace an idyllic style according to our strengths. You know, every team have their efficacy and limitations. Be it Indian or foreigner players, we have to find out the best possible combination to outwit our challengers.

You have coached Al Ahli before. Would the Asia experience aid you while coaching Salgaocar FC?
I have accumulated a wealth of experience from a number of premier divisions all across the globe where I have coached many a ball-player. Be it Celtic FC or Al Ahli, the experience is inexplicable in words. Hopefully I could channelize my expertise in the plausible ways to bring out the best from the group.

David Booth, another British coach, hasn’t enjoyed a good spell with Salgaocar FC before. Are you bothered about this?
Oh really? I am being iffy now (laughs)! Jokes apart, I’m only concerned with working with the chaps and staff and I am looking forward to the challenge. It happens with myriad of coaches with several clubs. The entire football fraternity are cohesive enough to deal with the newest challenges, sometimes we have to try out different combinations from the arsenal to get the job done harmoniously.

Did you consult with Derrick Pereira to get insights of the players, administration and most significantly the management?
I’m yet to dial his number and fix an appointment albeit I’d always welcome his inputs to run the team in the best possible way. Who knows, it might happen this week, or this month, let’s see (grins).

Goa teams, especially Salgaocar FC, have an enviable youth development system akin to Scottish teams. Can we expect to see an all-Indian starting line-up this season?
You see, predicting a starting line up so early would be utterly naive and gullible, at least from my point of view. It’s a day-to-day affair where we can expect a starting line up with the best combination available at that vantage point.

Our national team coach, a Brit, prefers the 4-4-2 style of play. Are you likely to adopt a similar game plan?
Might be, mightn’t be. It depends on the ammos available with me as well as the rival camp and their strategies. You can’t deploy same strategy against two outfits. There must be some alterations, otherwise the game would be futile and unworthy. Definitely we would embrace a basic gameplan, but the style of play is to be determined prior to every particular game.​