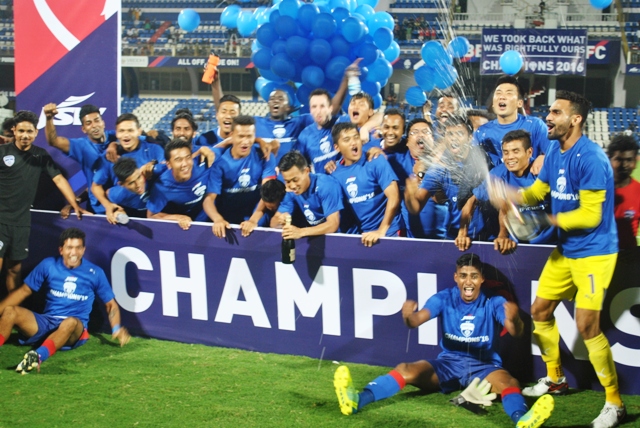 BENGALURU: April 17, 2016, is Day for the history books! A day to reckon as the Steelmen from the Garden City prevailed over Salgaocar FC, courtesy the two strikes from Eugeneson Lyngdoh and Seiminlen Doungel to triumph their second Hero I-League silverware in three years.

11,000-odd fans thronged the stadium to see their team clinching the Hero I-League once again, that too at the Sree Kanteerava Stadium.

If a win is what the Steelmen needed to touch the silverware, Salgaocar FC had the motivation to finish the Hero I-League in a respectable fourth position.

Bengaluru started the game from where they left against Kingfisher East Bengal last week. Attacks, which constituted mostly from the right flank, kept the Salgaocar defense on their toes throughout. They only took nine minutes to crack the visitor’s defense.

The goal came from an awful mix up from the Salgaocar defense when Karanjit Singh came out of charge to clear the ball only to find a clever Eugenson Lyngdoh at the top of the 18-yard box, in his usual calm, the medio placed the ball at the back of the net. Salgaocar FC defense could have averted the danger but the damage work had been done already.

Salgaocar FC, missing several of their regular players, were up for a fierce challenge. Santosh Kashyap’s men never looked the same team who were unbeaten in the last five rounds. It was a one-way traffic thereafter but the visitors survived many times, thanks to some timely save from Karanjit.

The second half resumed a bit late from the scheduled time due to the power failure at one of the towers in the stadium.

Jackichand Singh, lately-introduced Semboi Haokip tried every bit to cancel the home team’s lead of late, but an alert Bengaluru FC defense parried them away to secure the coveted silverware.

The host put the final nail in the coffin in the 88th minute from a wonderful with the ball run from Captain Sunil Chhetri, who relayed it to an unmarked Seiminlen Doungel, and he taps the ball home to send the crowd into a delirium.

The win gives the Blues an unassailable lead of 5 points over the Mariners, who are slated to host them next Saturday at the Kanchenjunga Stadium. Salgaocar FC succumb to the 6th position with 16 points with one match in hand.