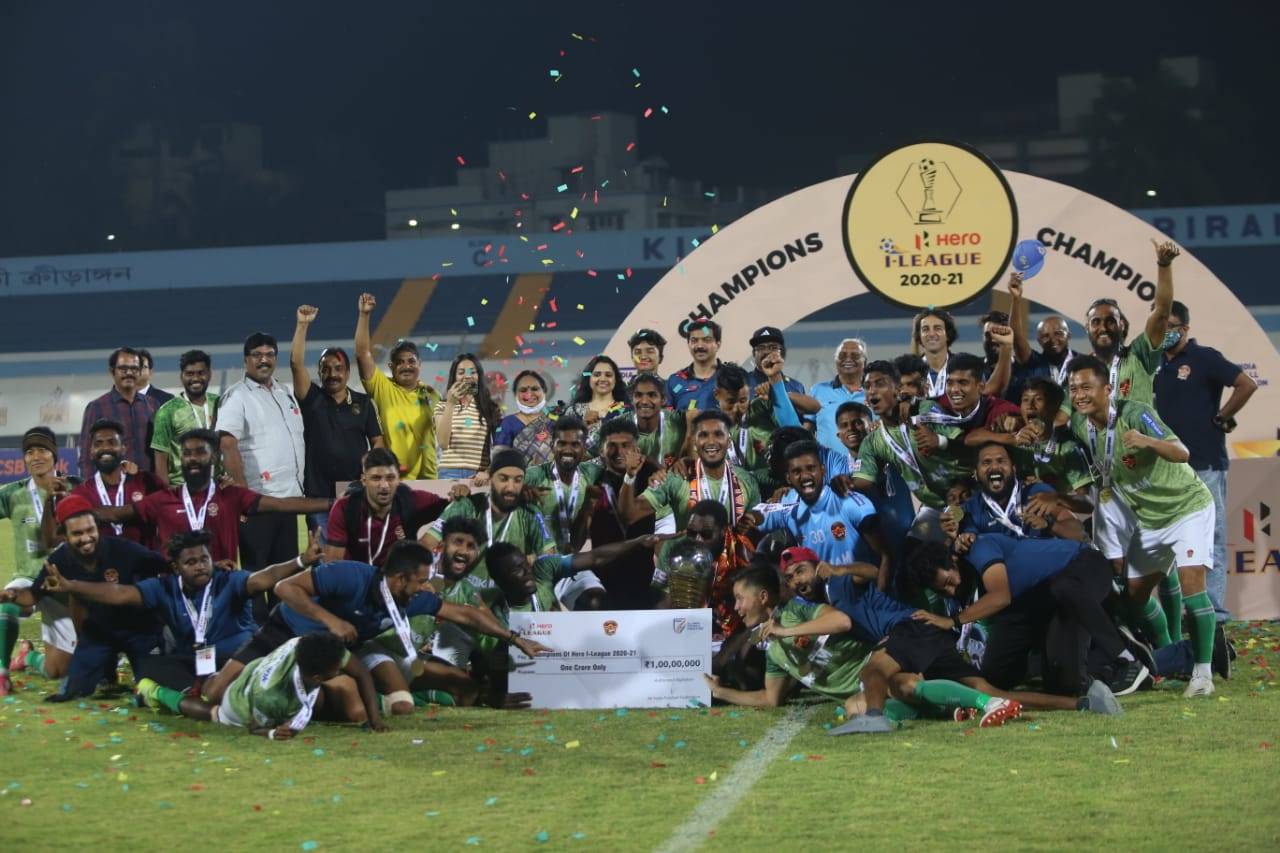 KOLKATA: Gokulam Kerala FC were crowned champions of the Hero I-League in spectacular fashion today (Match 27, 2021) at the KBK Stadium in Kolkata, West Bengal after the Vincenzo Annese coached side came from a goal down to score four goals in the second half and register a 4-1 win over TRAU. Bidyashagar Singh’s first-half strike did little to stop the Gokulam juggernaut as strikes by Sharif Mohamed, Emil Benny, Dennis Antwi, and Mohammad Rashid aided Gokulam in their quest for silverware. With Churchill winning 3-2 against RoundGlass Punjab FC, Gokulam Kerala FC shared points (29) with the Red Machines but were crowned champions courtesy of a better head-to-head record.

A revelation for the Hero I-League much like his team TRAU, Bidyshagar Singh opened the scoring for Nandakumar Singh’s side when he produced a stellar finish from outside of the box in the 23rd minute to hand TRAU the lead. Gokulam Kerala FC tried to pull a goal back before the break, but half-chances were missed by Philip Adjah and Dennis Antwi with the half-time scoreline reading 1-0 in TRAU’s favor.

Chanso Horam had a golden opportunity to hand TRAU their second of the match in the 50th minute but his chip shot went inches over the bar, following a well-worked classic counter-attacking move. Dennis Antwi failed to find the net in the 62nd minute as his header went agonizingly wide off an Emil Benny cross from the right flank.

Sharif Mohamed’s free-kick in the 69th minute from the edge of the box grabbed the equalizer for Gokulam Kerala FC. The comeback was complete in the 74th minute when Emil Benny tussled past his marker and slotted home through Amrit Gope’s legs to hand Gokulam the lead.

Three minutes later, Dennis Antwi’s powerful shot was parried by Amrit Gope, but the powerful effort lobbed into the TRAU net as Gokulam extended their lead to make the scoreline read 3-1. Vincy Barreto was sent off in the second-half added time but Gokulam had done enough damage to see the match off with ten bodies. Mohammed Rashid added more gloss to the scoreline with the last kick of the game as the full-time scoreline read 4-1.

In the other match of the day, dominant Churchill Brothers proved too hot for RoundGlass Punjab FC as they won 3-2 at the VYBK Stadium.

The Goan club surged into the lead in the 9th minute when Clayvin Zuniga was brought down inside the box. Off the resultant penalty, Slovenian striker Luka Majcen converted from the spot sending rival custodian Jaspreet Singh the wrong way.

Churchill doubled their lead in the 25th minute. An inconsistent Jaspreet after making a couple of acrobatic saves to deny the Goan outfit faltered in his decision making and allowed a routine cross to bounce off the post — all for Zuniga to put it home.

The third goal came during added time in the first half. Omnipresent Bazie Armand, the Churchill captain intercepted, went past his marker, and set it up for Lamgoulen Gou down the right. Gou, with all the time in the world, essayed an inch-perfect cross for an unmarked Zuniga to head home.

Facing an uphill task, RoundGlass Punjab FC managed to pull one back in the 65th minute when Joseba Beitia finished from just outside the box.

Four minutes later Punjab further reduced the margin. Churchill goalkeeper Shibinraj failed to latch on a Maheson Singh cross, and as the ball rebounded off the defender, Papa Diawara tapped it in. The full-time scoreline 3-2 in the Red Machine’s favor.

Meanwhile, the winners of the Hero I-League will get a prize sum of INR 1 Crore, while the second, third and fourth-placed teams in the table will get a sum of Rs 60Lakhs, 40Lakhs, and 25lakhs respectively. Furthermore, there have been some stunning performances in the Hero I-League this season that has led the season to end on an exciting note, the list of the individual awards along with the prize money follows below.