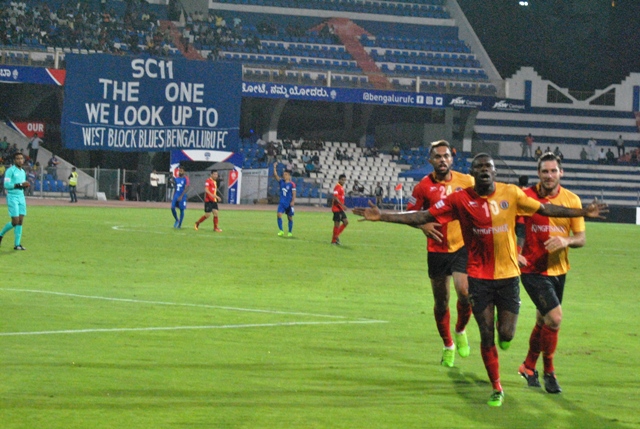 Bengaluru FC started with their familiar 4-3-3, with Sunil Chettri, Udanta, and Vinneth at the upfront.

Match started at a fast pace, both teams trying to make a foray. The visitors came out better by pressurising the host’s defence and managed no less than three corners in the first 22 minutes of the game.

Against the run of the game, Kingfisher East Bengal took the lead in the twenty-third minute when Ugandan defender Ivan Bukenya’s pass to Haitian Wedson Anselme from the half-line and set his run from the right flank, despite Juanan keeping a check on Wedson, allowed him to take the shot, the later’s curler went past Arindam Bhattacharya to put the visitors in the driver’s seat.

The sudden goal dented Bengaluru’s confidence, they lost the composure needed in the game.

Last 10 minutes of the first half saw a barrage of attacks on the Bengaluru end, East Bengal coming close to scoring few occasion.

Kingfisher East Bengal almost sealed the match in the 54th minute from the erstwhile Bengaluru FC player Robin Singh. He headed the ball to the back of the net from an immaculate cross by skipper Robert Lalthlammuana.

Few minutes before the second goal, Suni Chettri failed to make a connect on a Daniel Lalhlimpuia shot, which could have been termed as the closest chance for Bengaluru in the match.

Five minutes later, it was Robin Singh again who dealt the final blow by scoring his second and third for his team.

Vineeth pulled one back for the hosts in the 85th minute, but eventually, it couldn’t delay the Red & Golds from snatching all three points from the Blues’ fortress.

Meanwhile, it’s the first occasion when Kingfisher East Bengal thumped a double over the reigning champions since their inception. Following the scintillating win, Kingfisher East Bengal rise to the top once again with 24 points from eleven matches, while Bengaluru FC stay stranded at the fifth position with 13 points having played one match shy.