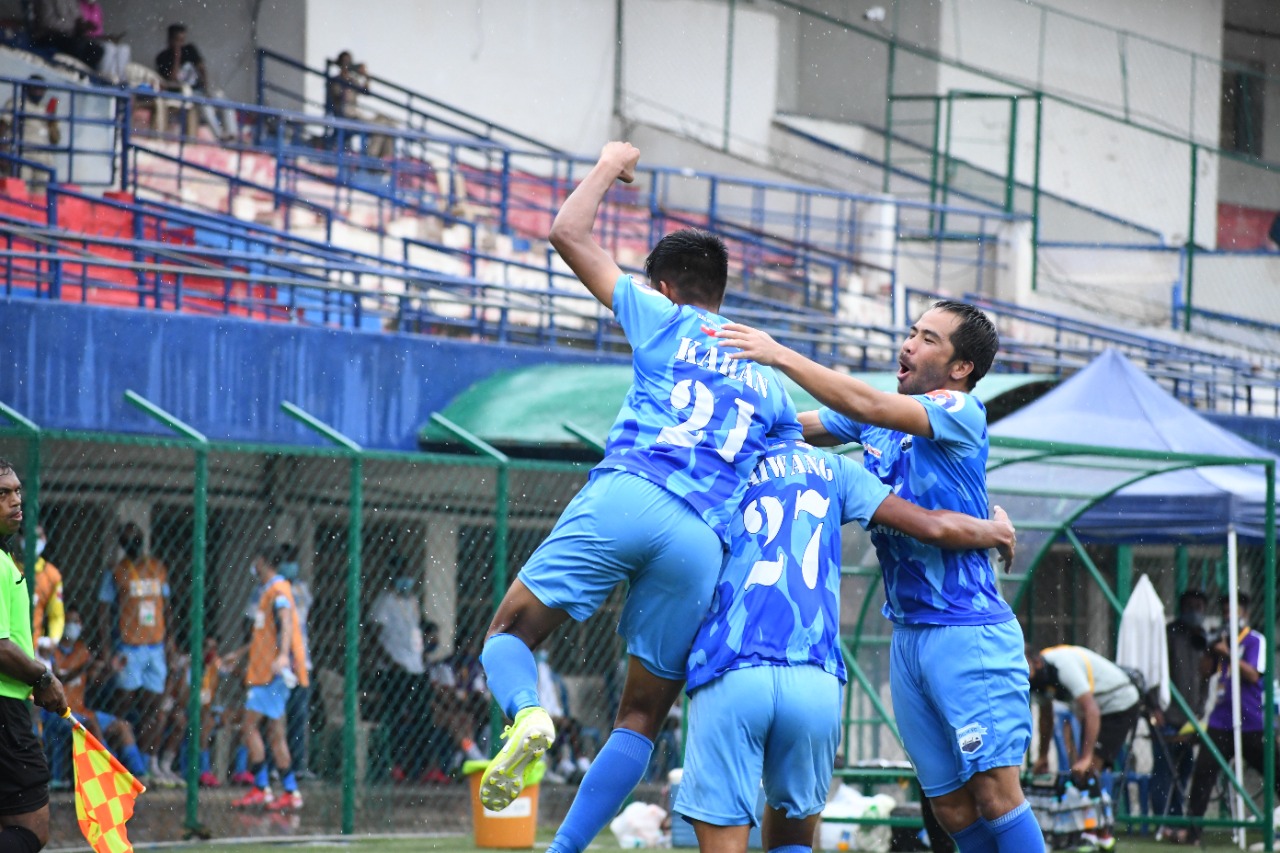 Corbett FC 1 (12’ John Chidi)
Lost to
Delhi FC 5 (45+1’ Willis Plaza, 75’, 90+5’ Anwar Ali, 88’ Samuel Shadap, 90’ Laiwang Bohham)
AIFF MEDIA TEAM
BENGALURU: Delhi FC produced a late surge of goals to oust Corbett FC 5-1 in a Group B encounter in the Hero I-League Qualifiers 2021. With the pouring rain providing the setting here at the Bangalore Football Stadium, Delhi FC adapted to the difficult playing conditions to assert their dominance over the club from Uttarakhand. The side from the capital overcame a one goal deficit to take all three points from the match. Corbett FC produced a gritty performance to contain Delhi FC for the first 45 minutes of the match. However, the Rudrapur-based club could not keep a lid on Delhi FC for much longer, as they conceded the equaliser in first-half stoppage time. Delhi FC showed their fantastic attacking attributes at the death, scoring four goals in the final 15 minutes plus added time in the second half.

Delhi FC looked to settle into a comfortable passing rhythm in the opening stages of the game and showcased a telepathic understanding between their midfield and forward players. Their first sighting of the game came skipper Anwar Ali’s way from a dead-ball situation, but his free-kick from 20+ yards sailed over the bar harmlessly.

Corbett FC struck the first blow of the game in the 12th minute from a rapid counter-attack, highlighting the team from Uttarakhand’s ability to transition from defence into attack in a matter of seconds. After winning the ball in midfield, striker John Chidi was released with a quick through pass, leaving him in a one versus one situation with Delhi FC centre back Suraj. Chidi showed that he not only had pace to burn, but also the composure to beat his man by bringing the ball over to his favoured right foot, before sliding the ball calmly past a hapless James Kithan in the Delhi FC goal. 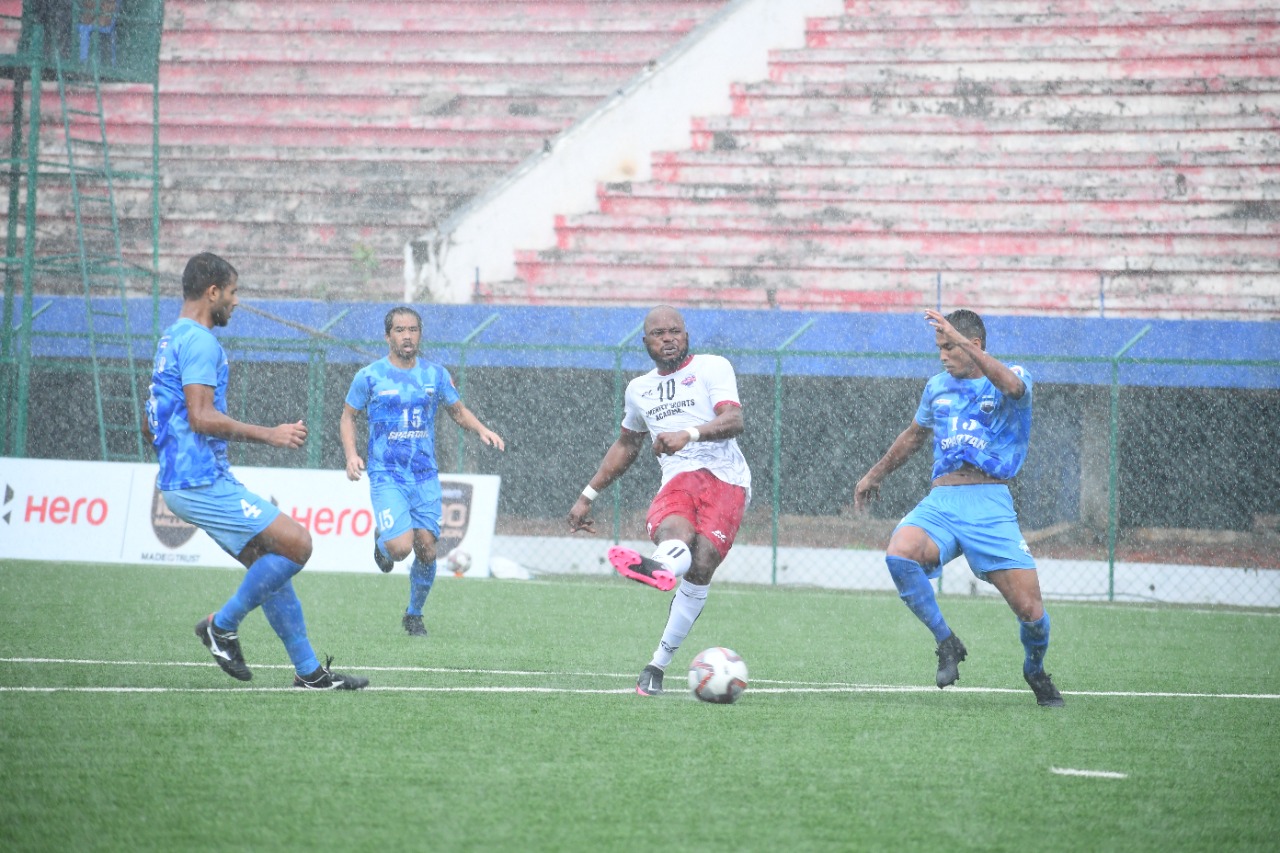 The rain showed no signs of slowing down as the constant downpour soon resulted in a heavily waterlogged pitch. The conditions required both teams to adapt their playing style accordingly in order to take away the three points from this match. Delhi FC responded to this need first, making two tactical substitutions in the 30th minute by bringing on Willis Plaza and Sergio Barboza Jr. in place of Radhakanta Singh and Fahad Temuri. The changes from coach Surinder Singh almost paid off instantly, as the two substitutes nearly combined to bring Delhi FC back on level terms.

Corbett FC did really well to keep the team from the capital at bay for the majority of the first half, but the mounting pressure proved to be too much to sustain on the cusp of half time. Willis Plaza had been a constant feature in his side’s attack since coming on, and he made no mistake in added time of the first half from an inch perfect cross from left-sided winger Nikhil Mali to level the score at 1-1 going into half time.

Both teams came out after the half time break willing to take the fight to the opposition. The waterlogged pitch created the conditions for a scrappy affair, with tackles flying in from both sides. The first moment of quality came in the 75th minute from a free-kick won by Anwar Ali, who was brought down as he set off on a marauding run with the ball. What followed was a moment of pure magic from Anwar, who stepped up to take a left footed free-kick over 35 yards from goal, that left Corbett FC goalkeeper Ahamed Asfar scrambling. Already looking regal in defence, Anwar Ali looked like he could do no wrong on a football pitch. 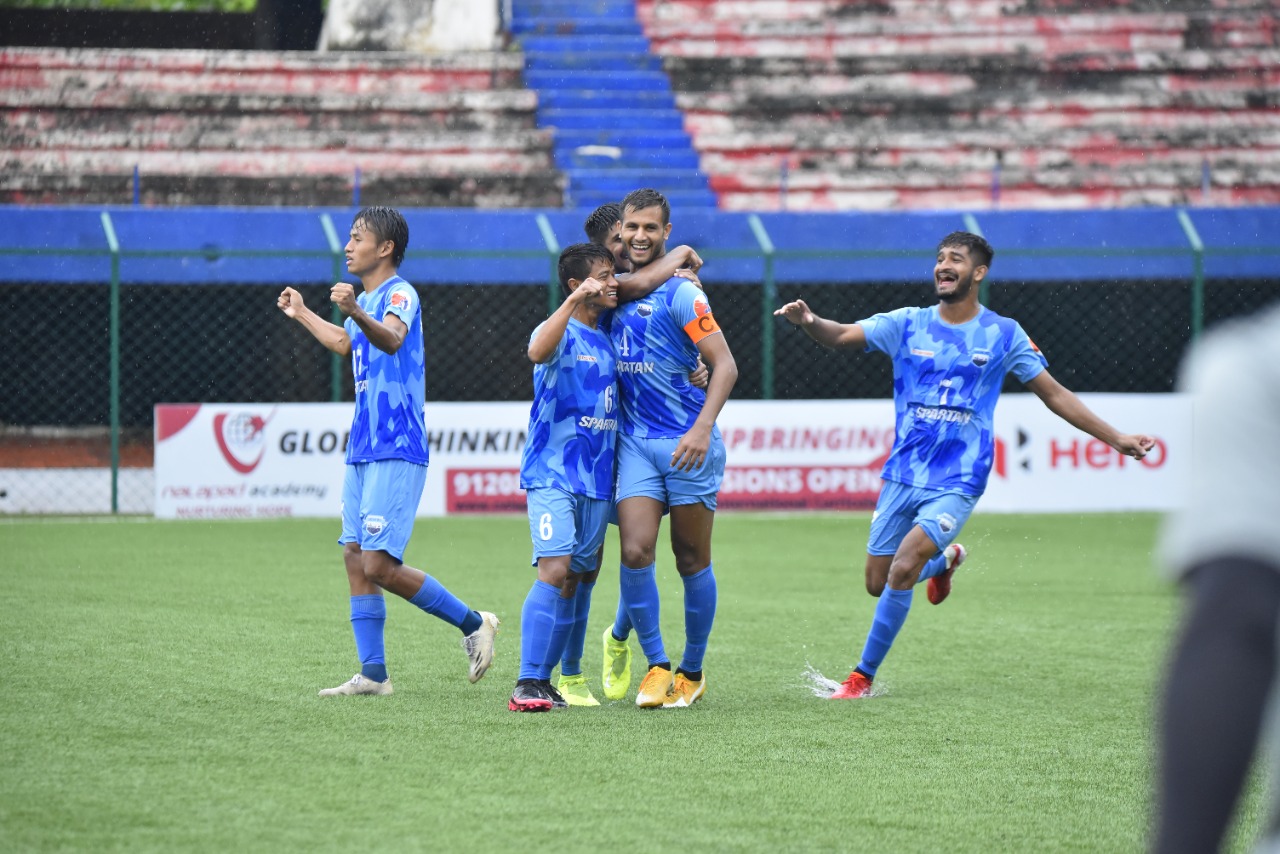 Taking the cue from his captain, defender Samuel Shadap produced his own world class strike in the 88th minute to put the game beyond Corbett FC’s reach. Lingering at the edge of the box from a Delhi FC corner, Shadap got on top of a half-cleared ball to produce a first time half volley that went through a crowd of bodies and nestled into the bottom right corner, leaving the goalkeeper no chance.

Substitute Laiwang Bohham got in on the act in the 90th minute, as he was on hand to volley home the rebound after goalkeeper Asfar came out to get a fist to the Samuel Shadap cross, but was unable to clear the danger. As the floodgates opened for Delhi FC, captain Anwar Ali rounded off the goal scoring with another free-kick over 30 yards from goal. This time Anwar produced a knuckleball free-kick with his right foot that dipped and swerved in the air before finding the back of the net. If goalkeeper Asfar could have done better with the first free-kick goal, he should definitely have done better the second time around, as he was unable to get a hand to the ball as it flew over his head.

With this commanding victory, Delhi FC sit at the top of Group B, with one foot already in the final round of the Hero I-League Qualifiers 2021. The defeat ends Corbett FC’s hopes of qualifying for the Hero I-League this season, with one game still to go.