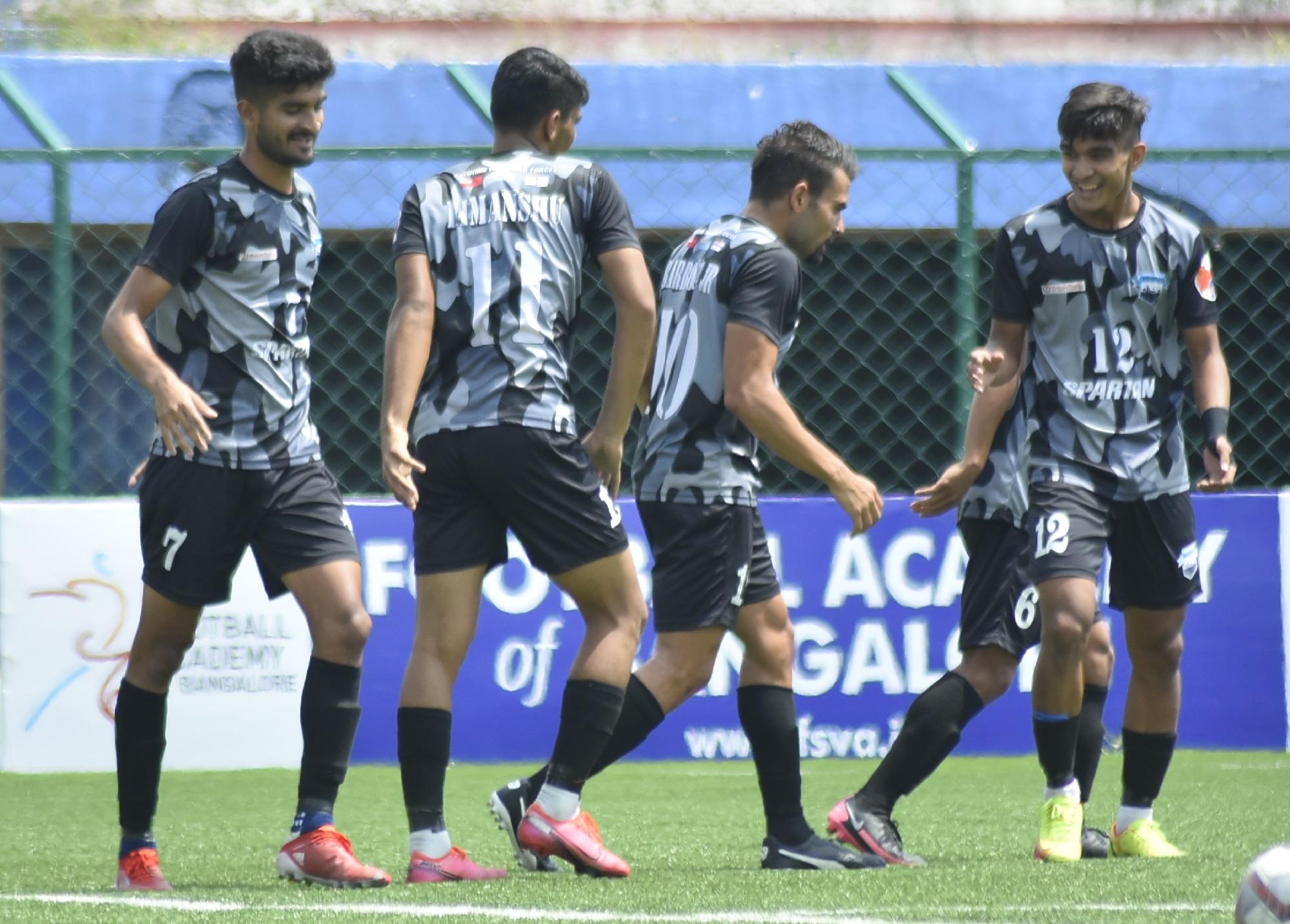 BENGALURU: Delhi FC finished their Hero I-League Qualifiers 2021 campaign with a demolition job on Madan Maharaj FC as they thoroughly outclassed the side from Madhya Pradesh in a comfortable 6-0 victory at the Bangalore Football Stadium. Delhi FC scored three goals on either side of halftime with Nikhil Mali and Gagandeep Bali netting a brace each, while Sergio Barboza and captain Anwar Ali added one goal each to end the capital side’s maiden Qualifiers campaign on a high.

Delhi FC dominated proceedings from the first whistle, having an early chance to take the lead when Brazilian Sergio Barboza ran clean through on goal with only the goalkeeper to beat. Barboza was caught up by a retrieving Pranendra Singh Thakur, but the latter’s last-ditch tackle on the Delhi FC attacker was deemed a foul inside the box by the referee. Having earned the penalty for a second time in successive matches, Sergio Barboza stepped up to take the spot-kick and calmly converted from his third attempt in the 5th minute, after he was instructed to retake the spot-kick twice for premature movement off the line from MMFC goalkeeper Subhojit Saha.

In the 13th minute, Jagannath Sana produced Madan Maharaj FC’s only shot on target in the first half as he embarked on a wonderful individual run, twisting and turning to evade tackles from the chasing Delhi FC players before hitting a low drive and drawing a fine save from goalkeeper Suraj Mallick.

Delhi FC doubled their lead in the 19th minute through winger Nikhil Mali. The goal came from a well-worked set piece routine that came right out of the Delhi FC training ground. With the MMFC players anticipating a shot from Anwar Ali’s free-kick from a promising position, Delhi FC caught them off guard as Ali played in Sergio Barboza who drilled in a low cross that was tapped in comfortably by Nikhil Mali at the edge of the 6-yard box.

Nikhil Mali soon doubled his personal tally and made it 3-0 for Delhi FC in the 21st minute. The move began with an adventurous run from Nikhil Mali before he unleashed a powerful shot towards the near post. Although the effort was on target, it should have been a regulation save for Subhojit Saha, who chose to parry the ball away instead of grasping it in both hands. Himanshu Jangra kept the ball alive for Delhi FC inside the box, and squared it for teammate Fahad Temuri, who played the ball into the path of the oncoming Nikhil Mali who finished from close range. The goal came too easily for the capital side and indicated signs of more to come in the game with over an hour of playing time still remaining.

Nikhil Mali could have had a quickfire hattrick within a span of five minutes, but he missed a glorious chance to bag his third goal in the 24th minute. MMFC goalkeeper Subhojit Saha, who was already having a rough day in the office so far, cleared the ball straight towards Sergio Barboza at the edge of the box. Barboza could not capitalise with his initial shot, but the ball was parried into the path of Nikhil Mali from Saha’s initial save. With the goal gaping in front of him, Nikhil Mali missed the easiest chance of the game and spared Subhojit Saha’s blushes. Subhojit Saha was substituted off the pitch soon after in a change of personnel for MMFC.

In the 42nd minute, Anwar Ali defended a cross inside the Delhi FC box and emerged with the ball as he played a pinpoint through ball to set winger Himanshu Jangra on his way towards goal from the inside left channel. Himanshu skilfully took on Abhishek Das and made space for himself to produce a curling shot towards goal that was acrobatically tipped over the bar with a full-stretch save from goalkeeper Abhishek Calvin.

Delhi FC resumed the second half just as they had played all through the first, and made it 4-0 through substitute striker Gagandeep Bali. After positive attacking play from Himanshu Jangra down the right flank wherein he drove to the byline and pulled back his low cross, Sergio Barboza had his initial attempt on goal blocked and Gagandeep Bali was on hand to finish from the loose ball from close range.

The second-half substitute grabbed a brace seven minutes later and made it 5-0 for Delhi FC in the 63rd minute. Nikhil Mali turned from goal scorer to provider this time as he swung in an inch-perfect cross with his right foot from the left-wing. With no pressure on him to block the cross, he found an unmarked Gagandeep Bali between two defenders inside the box, with the striker making no mistake with his headed finish.

Delhi FC compiled further misery on MMFC ten minutes later in the 73rd minute as the side from the capital racked up half a dozen goals. Nikhil Mali played in a low cross with his left foot this time around, which was met inside the box by centre-back Anwar Ali, who had timed a late run into the box to meet the ball and slide home a toe-poked finish past the hapless Abhishek Calvin.

Delhi FC had many more chances to add to their sizeable advantage over the remainder of the game, but could not do so as the likes of Laiwang Bohham, Himanshu Jangra, and Samuel Shadap all missed relatively easy chances.

The result ensured that Madan Maharaj remain winless in the final round of the Hero I-League Qualifiers, while Delhi FC finish on four points.