Champions Set Off Their Voyage In Style 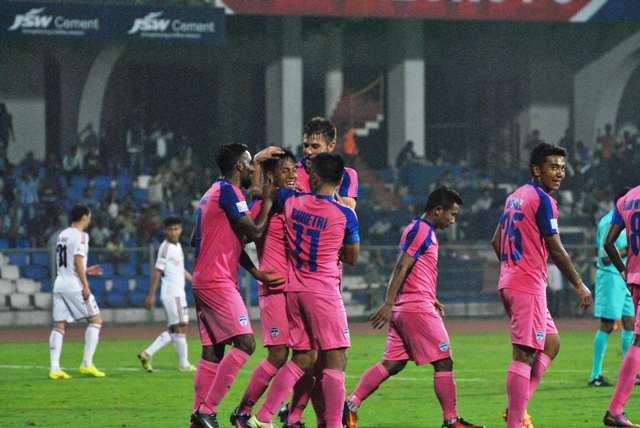 BENGALURU: With a poster put up by the supporters urging team for the third star on the crest, Bengaluru FC sporting their new pink outfit thrashed Shillong Lajong FC 3-0 at the Kanteerava Stadium.

The first 20 minutes witnessed a lacklustre show with both teams failing to make any intrusion in opponents’ defence.

Adding to the misery, SLFC defenders failed to clear the ball, and in the melee, Udanta tapped the ball to the back of the net.

Post the goal, BENGALURU forayed into the opponents’ defence many times making them jittery, Vishal Kaith’s timely intervention, prevented them from scoring.

Bengaluru almost got their second goal in the last minute before the lemon break, Eugenson missing a one-on-one with the keeper, the follow up from Chhetri hit the post, while Vishal was not in the position.

Bengaluru continued pressing after changing ends, owing to some shabby defending by the highlanders.

They got the second goal again via Udanta in the 68th minute. Lajong barely looked threatening as the ball rarely crossed the half-line.

The best was kept until the 79th minute. Season’s first exciting goal came from debutant Sena Ralte with a 30-yard smasher.

Udanta’s brace gave him the man of the match award.