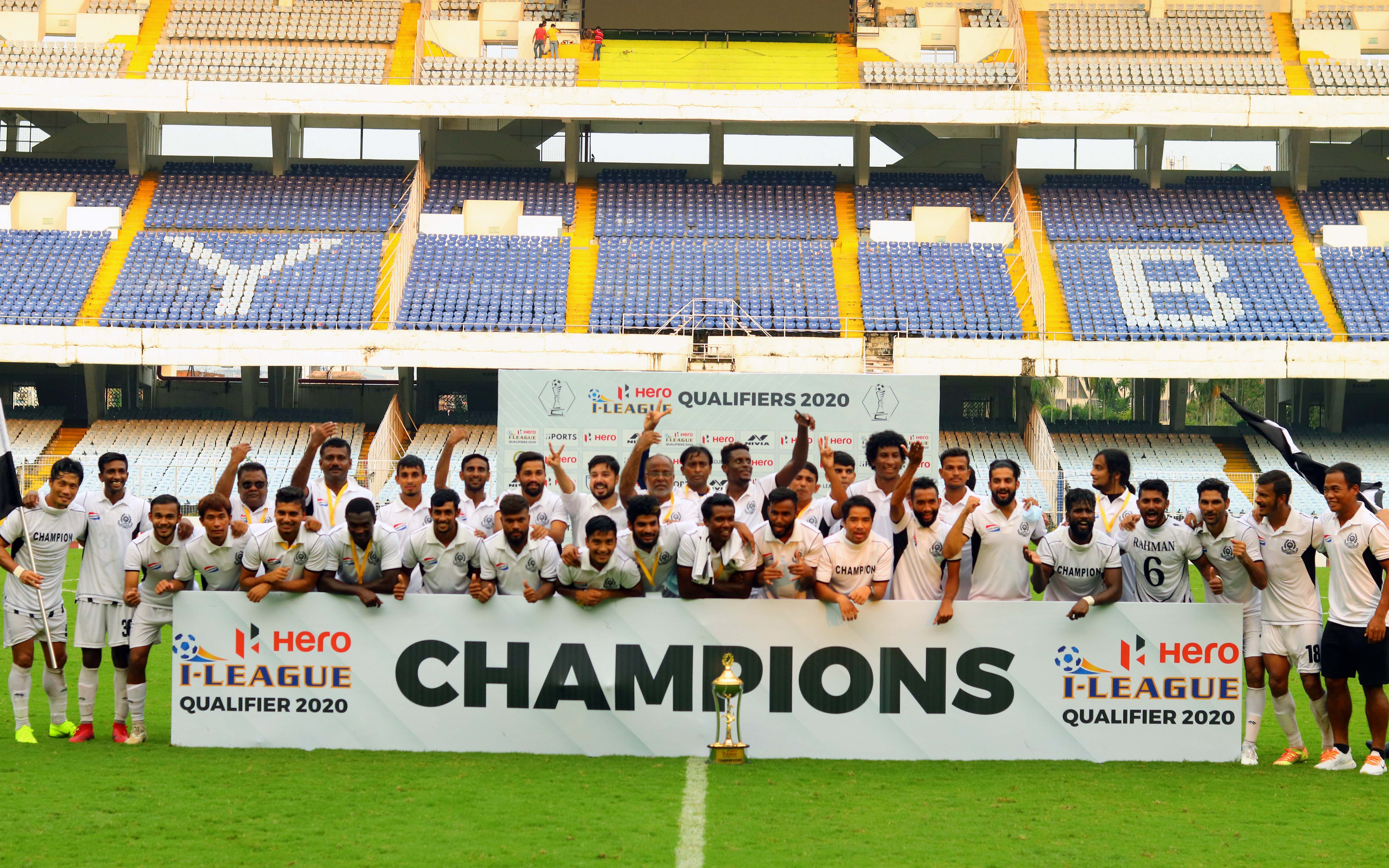 Kolkata, October 19, 2020: Champions Mohammedan Sporting managed to stay unbeaten after a goalless draw against FC Bengaluru United (FCBU) in their final fixture of the Hero I-League Qualifiers 2020 at the Vivekananda Yuba Bharati Stadium in Kolkata on Monday, (October 19, 2020).

Both sides had decent chances with the goalkeepers kept busy but neither could find the back of the net, thus splitting the points. With this result, Mohammedan finished at the top of the table with 10 points while Bengaluru finished third with five points.

MDSP made a bright start despite a heavy downpour through the lively Hira Mondal, who cut in from the left in the third minute and sent a low right-footed shot which zipped off the wet surface. FCBU custodian Kunzang Bhutia did well to get his body behind the ball and his defenders helped him safely get rid of the rebound.

The game opened up with chances at both ends in the 12th minute. Mondal intercepted a pass, sparking off a counter-attack with his header towards Willis Plaza. The Trinidadian laid it off for Sattyam Sharma, who dragged his shot wide. Bengaluru responded quickly with William Opoku releasing Asraf Mondal on the right flank but his cross was just a tad too high for Azharuddin Mallick, allowing Hira Mondal to hack it out for a throw-in.

Opoku was constantly dropping deep and creating problems for the Mohammedan defence with intelligent passes to release his teammates. In the 15th minute, he played a quick pass with the outside of his boot into the feet of Mallick, but the forward failed to bring it under control.

Vanlalbiaa Chhangte, who opened the scoring in Mohammedan’s previous game against Bhawanipore, sprung into action in the 20th minute as he skipped past Asraf Mondal but failed to pick out Plaza, who was unmarked in the middle of the box.

There was a scare for Mohammedan in the 25th minute as custodian Priyant Singh failed to collect a corner after coming off his line but was lucky as the rebound fell kindly for him to collect at the second time of asking.

Singh was again called into action, just two minutes later, and this time picked up a booking for a foul on Mohammad Rehbar. Ronaldo Oliveira found Rehbar with a perfectly weighted pass over the Mohammedan defence, and the midfielder managed to poke the ball past the onrushing goalkeeper who subsequently brought him down with a late tackle. Opoku took charge of the resulting free-kick but sent it flying well over the bar.

Plaza exchanged a quick one-two with Sattyam in the 36th minute and unleashed a powerful shot looking for the top corner. However, Bhutia was well-positioned to make the save, ensuring the scores remained level as both teams walked off the field at half-time.

Both teams made changes at half-time with Shreyas Ketkar and Subash Singh coming on for Bengaluru and Mohammedan respectively. Singh was immediately in the thick of things with a driving run into the box in the 47th minute. He was tackled by Amey Ranawade but the ball rebounded fortuitously against the forward and bounced just wide of the post with the keeper well-beaten by the lucky deflection.

There was some great display of strong tackles at both ends in the 57th minute. First, Plaza picked up the ball on the halfway line and nutmegged his marker Akhil but was brought down by a last-ditch tackle from Bengaluru captain Robert Primus. Bengaluru responded with a quick counter, with Opouku cutting in from the left flank. He released Mallick, who managed to get past his marker but this time Kingsley Eze came sliding across to snuff out the danger in the Mohammedan box.

Just around the hour mark, Bengaluru substitute Ketkar sent a powerful drive which seemed destined to find the top corner but Mohammedan captain Singh had the angle covered with a brilliant dive.

Singh pulled off another great save in the 76th minute as Vignesh Gunashekar broke past Eze. The Bengaluru midfielder got lucky as his touch took the ball over Eze sending him through on goal but Singh came flying off his line to save right at the feet of Vignesh.

Champions Mohammedan will be pleased with the result as they maintain their undefeated run in the tournament, having secured the Hero I-League berth with their win against local-rivals Bhawanipore FC in their previous outing. They were presented with the Hero I-League Qualifiers 2020 trophy by Shri Aroop Biswas, Minister of Public Works and Youth Services & Sports of West Bengal, marking their return to the Hero I-League after a seven-year hiatus.

After the match, Mohammedan coach Saheed Ramon said, “The boys are feeling very, very happy as are the officials and everyone is rejoicing. This was the last game we played and it was a little bit difficult as the team we played against came all out to win. But we’ve watched them play, studied their strategy as they play possession football and planned accordingly. At the end, both teams had their chances but we finished undefeated.”

Speaking about the result, FCBU head coach Richard Hood said, “I think it was definitely two points lost. I am happy with the intent and style of play we displayed but again we need to find out ways to be more efficient. If given the chance to build on this project, that’s one aspect we’ll focus upon.”