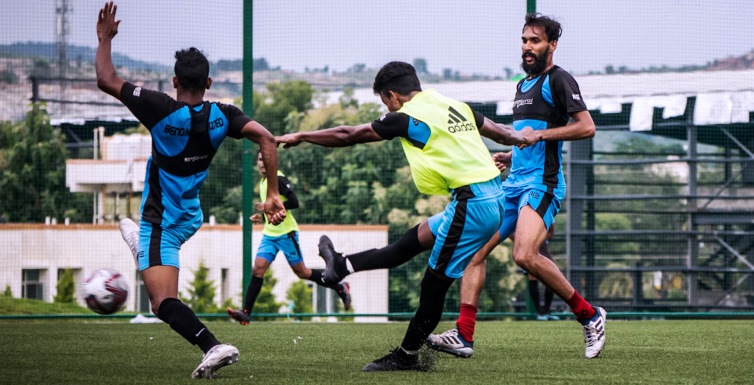 KOLKATA: The first sporting event in India after the COVID-19-induced lockdown gets underway with Bhawanipore FC and FC Bengaluru United kicking-off the proceedings at the Hero I-League Qualifiers 2020 at the Vivekananda Yuba Bharati Krirangan in Kolkata at IST 12.30pm on Thursday, October 8, 2020.

The match will be telecast live on 1Sports channel as well as streamed on 1Sports Facebook page (https://www.facebook.com/1SportsInLive/).

All five participating sides have been operating their daily lives inside the COVID-19 safety bubble where they have been kept in an initial four-day isolation period, before beginning training ahead of the tournament.

“The whole world has been facing the pandemic situation for the last few months. No denying that has hampered everyone’s daily lives. This tournament is a big effort at returning us all to our daily lives,” said Bhawanipore FC Head Coach Sankarlal Chakraborty, on the eve of their opening match. “This is an important step for us all.”

FC Bengaluru Head Coach Richard Hood stated that though there are a number of restrictions imposed on all the sides, keeping in line with the COVID-safety regulations, operating under such guidelines have become “second nature.”

“Most of the best practices that come with the COVID Safety regulations have been the new normal and have become second nature for our squad by now,” said Hood. “We appreciate the regulations that have been charted out for us and also acknowledge the pro-activeness of the organisers in being adaptive and responsive to evolve the same as time progresses,” he added.

Hood sounded wary of his Kolkata-based opposition, who have some “experienced” campaigners in their ranks.

“Bhawanipore is a club with a big history. More importantly, they are coached by the very capable Shankarlal Chakraborthy who is a highly experienced technician and respected person in our game,” said Hood.

“Their squad comprises experienced and well-known players who have been through the grind at varying levels of the game over the years and we are looking forward to a competitive and intense game on Thursday,” he continued.

Chakraborty, on the other hand, will be seeing some familiar faces in his opposition ranks — in the form of players who have already played under him during their time together at the Kolkata Maidan.

“Bengaluru United are a very capable side. They have been able to train for a long time ahead of the tournament. This gives them a bit of an edge over the rest,” he maintained. “They have a good coach in Richard, and a very good assistant coach as well in the form of Gouramangi Singh, who has such a vast experience of international football under his belt.”

“A lot of their players have played under my coaching back in the days when they were in Kolkata,” said Sankarlal. “Guys like Azharuddin Mallick and Rana Gharami have played in Kolkata, and know my style of coaching. So we would have to be wary of the threat that they pose against us.”

“Like every team out here we have only one thing on our mind and this is to compete through every second. We have every intent to impose our playing style and deliver successful performances that people will recognise as a distinct game model that is unique to us,” said Hood.