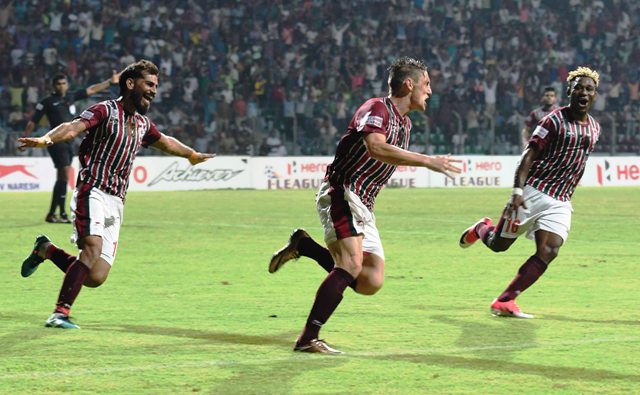 Kolkata: Mohun Bagan recorded a come-from-behind 2-1 win against Chennai City FC but Aizawl’s 1-1 draw against Shillong Lajong saw them finish runners-up for the second consecutive year in a last round Hero I-League encounter at the Rabindra Sarovar Stadium on Sunday.

Nanda Kumar (31′) gave the visitors a shock lead before Yusa Katsumi (45’+2′) pegged one back just before the lemon break with Darryl Duffy (77′) handing his side the lead in the second half.

Home goalkeeper Debjit Majumder was sent off in the 80th minute.

The hosts made two changes from their 0-1 defeat at Aizawl FC last Saturday. Jeje Lalpekhlua and Azharuddin Mallick made way for Balwant Singh and U-22 player Rainier Fernandes.

Chennai ringed in five changes from the 6-1 loss to Churchill Brothers.

A minute’s silence was observed for former East Bengal captain Shanto Mitra who breathed his last earlier in the day.

Mohun Bagan’s first flicker of a chance was wasted by Yusa Katsumi, blazing over a free kick from just outside the box after Norde and Duffy combined well only for the latter to be thwarted illegally.

Minutes later, the stadium erupted in joy as Dipanda Dicka gave Lajong the lead in the ninth minute against Aizawl FC.

The news spread like wildfire within seconds as supporters bathed in green and maroon hue went berserk.

The mariners came close twice in the next few minutes.

Raynier’s header was first saved well by veteran custodian Karanjit Singh followed by Norde who showed sublime individual skills to get past a rival player only to but blast his attempt over the bar.

As the hosts continue to muff chances, one after the other, Chennai scored much against the run of play. Nanda Kumar trotted inside the box to prod home into the far corner after Edwin Sydney set him up.

Balwant missed another opportunity in the dying minutes of the first period before Katsumi drew level in injury time. The former ONGC player beat Karanjit on his right side first time after Balwant put him through on the edge of the box.

After the break, Mohun Bagan continued to press harder keeping the visiting defenders on their toes. Balwant though, remained luckless heading over from close off a corner.

Bagan took the lead for the first time in the match when Duffy netted his eighth goal of the competition but the news of Aizawl equalising watered down celebrations.

The match reached a flashpoint when home keeper Debjit Mazumdar was given marching orders as Mohun Bagan players vented their ire on the linesman.