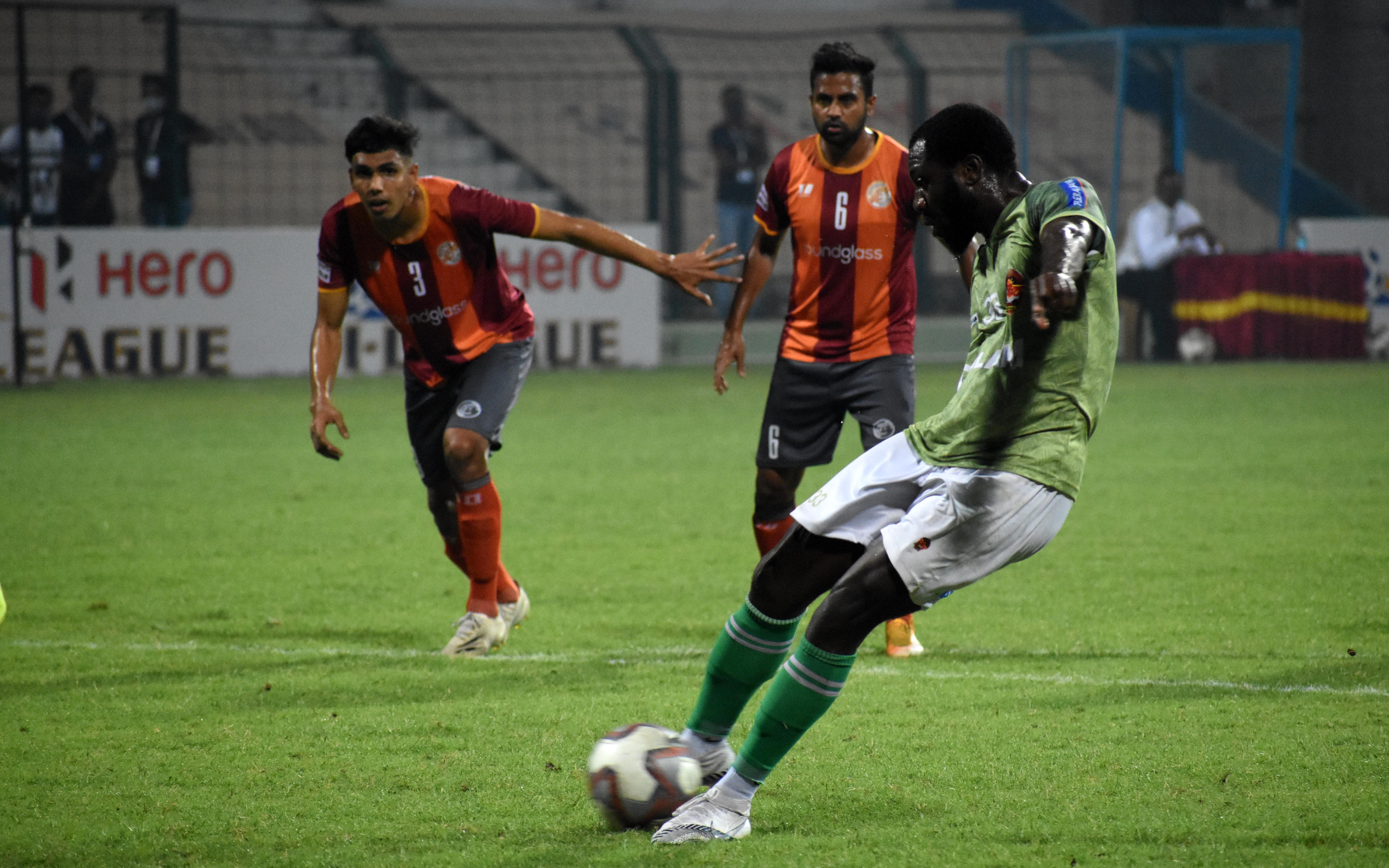 KALYANI: Dennis Antwi’s 17th-minute penalty strike proved to be the difference between Gokulam Kerala FC and RoundGlass Punjab FC as the Malabarians trotted on to a slender 1-0 win at the Kalyani Municipal Stadium in Kalyani, West Bengal today (March 05, 2021), to go second in the Hero I-League table, level on points with third-place TRAU and six points behind league leaders Churchill Brothers.

Prior to proceedings kicking off, Punjab head coach Curtis Fleming was named Coach of the Month for February after his side picked up 13 out of a possible 15 points in an unbeaten run last month. Their goalkeeper Kiran Limbu was awarded the Player of the Month Trophy, courtesy of a number of stellar performances that saw him keep three clean sheets and pick up two Hero of the Match awards.

With vital points on the line for both contingents, the opening minutes of the match witnessed end-to-end stuff with both teams having a chance to take the lead. The first opportunity of the match fell to Dennis Antwi in the 8th minute when he latched onto a Mayakannan low-cross, however, his shot on the turn went inches wide of the goal.

For RoundGlass Punjab FC, it was Papa Diawara with a chance to put them ahead. In the 14th minute, Chencho Gyeltshen found Diawara inside the box with a swirling cross, but the forward failed to hit the target with his strike.

In the 16th minute, Saurabh Bhanwala brought down Dennis Antwi inside the box after the forward was trying to wriggle his way to create space. The referee pointed to the spot and Antwi coolly converted the penalty kick to hand the Malabarians a solitary goal lead.

The forward duo of Gokulam Kerala FC in Dennis Antwi and Philip Adjah gave problems to the RoundGlass Punjab FC defence and tried to double their team’s advantage before half-time. Meanwhile, Telem Suranjit Singh proved to be a handful for Gokulam defenders.

In the 33rd minute, Suranjit attempted a first-time volley but his effort was blocked. He tried to score on the turn from the loose ball but skewed his shot wide of the target. Four minutes later, Suranjit cut inside from the right flank and sent a curling shot which went just inches wide of the goal.

Kiran Limbu made a world-class save in added time at the end of the first half as he tipped over a Naocha Singh shot that seemed destined for the top corner, which ensured that Gokulam Kerala FC led by a solitary goal to nil at half-time.

RoundGlass Punjab FC lacked creativity up front in the first as well as the second half. And that proved to be fruitful for Gokulam Kerala FC as the Malabarians thwarted their attacks with ease while mounting their own. Though the Curtis Fleming-coached side dominated possession in the second half, they lacked in creating clear goalscoring chances.

In the 69th minute, Philip Adjah ran onto goal and tried to curl a shot into the back of the net from outside of the box. His effort came agonizingly close to doubling the Malabarians advantage. Two minutes later, Papa Diawara was found in a similar spot where he tried to twist and turn in an effort to create space. But, the Gokulam defence neutralized his threat.

Curtis Fleming made a tactical change in the 75th minute, bringing on forward Sumeet Passi for midfielder Souvik Das, in an attempt to grab points off the game. However, the chances fell to the other side. In the 80th minute, Dennis Antwi tried to find the back of the net from the edge of the box but his shot took a heavy deflection and went out for a corner kick.

RoundGlass Punjab FC tried to come back into the game and grab the equalizer. But, chances were rare and the Malabarians committed bodies in defence to see out the match. The full-time scoreline read 1-0 as Gokulam Kerala FC leapfrogged TRAU to go second on the Hero I-league table courtesy of a superior head-to-head record against the Manipuri side.