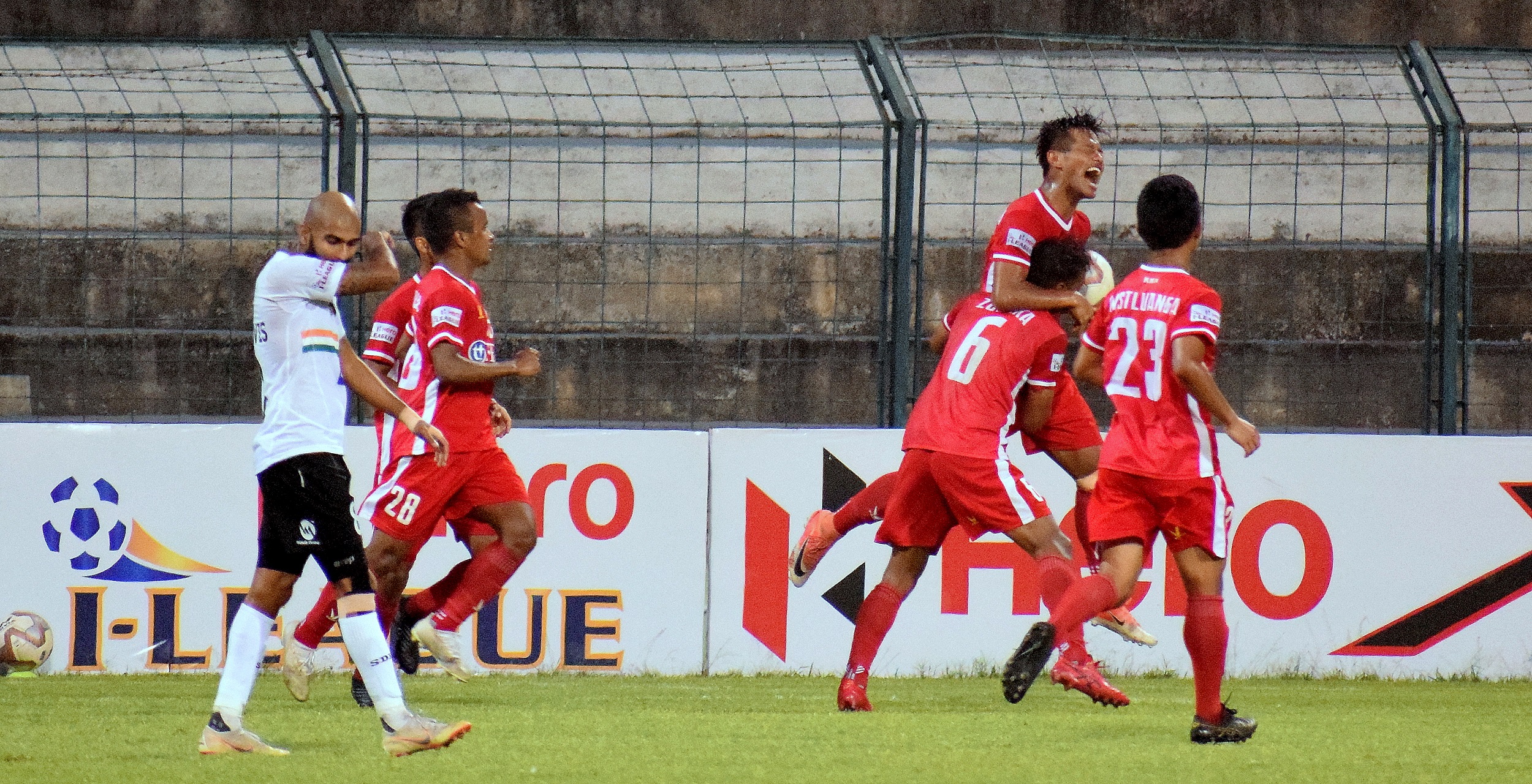 KALYANI: Two late goals in five minutes helped Aizawl FC to stage a remarkable comeback and defeat 10-man Sudeva Delhi FC 2-1 at the Kalyani Municipal Stadium in Kalyani, West Bengal on Thursday (Match 25, 2021). After Sairuatkima was sent off in the 34th minute, Kean Lewis’ magical 42nd-minute strike was cancelled out by substitute Rohmingthanga Bawlte in the second half, but Brandon Vanlalremdika’s penalty in the added time of the second half proved to be the difference between the two sides.

Coming on the back of a 3-1 win over Chennai City FC, Yan Law’s Aizawl FC continued with their usual attacking style of possession-based football in the opening minutes of the match. The swiftness of the Aizawl forwards gave trouble to the Sudeva Delhi FC defence and in the 13th minute, Alfred Jaryan’s solo run to hand the people’s club an early lead came agonisingly close as his shot was parried away for a corner. Off the corner kick, a thumping header by Laldinpuia earned a world-class save by Rakshit Dagar to protect Sudeva Delhi from falling behind.

Passing the ball around confidently in the final third, it seemed it was only a matter of time before the Aizawl FC juggernaut would start scoring goals. Half chances for Alfred Jaryan and Brandon Vanlalremdika went amiss but the attacking momentum aided the people’s club in taking control of the game and dominating possession.

In the 34th minute, Sudeva Delhi FC, who were unable to create clear goal scoring chances for much of the first half, were reduced to ten men when Sairuatkima earned a second yellow card for a heavy challenge. Down a man, Sudeva could have only hoped for a miracle to give them the lead. That miracle came in the form of Kean Lewis.

In the 42nd minute, Lewis took charge from outside of the box and released a highlight-worthy finesse shot that left the opposition goalkeeper with no reply, as it curved around his fingertips and crashed home to hand Sudeva a solitary goal lead going into half-time.

Unfazed by conceding, Aizawl FC upped their attacking ante and went all out in an effort to grab the equaliser. With both teams safe from relegation, it was perhaps pride that prompted the people’s club to push harder and give more than their best to salvage a result against their opponents.

But while Aizawl pressed for the equaliser, Sudeva Delhi FC committed bodies in defence and played on the counter. In the 49th minute, the debutants could have doubled their lead had William’s curling shot from a tight angle had not hit the side-netting.

Meanwhile, Sudeva Delhi FC in an attempt to hold on to their slender lead, played it safe at the back and defended as their lives depended on it. Their ability to defend as a unit proved problematic for Aizawl. With Aizawl sending in long balls from the flanks, the centre-back pairing of Sudeva did well to thwart the dangers.

In the 74th minute, Brandon tried to find Aizawl bodies inside the box with his clever pass but the Sudeva defence intercepted the pass before it could reach Alfred Jaryan inside the box. But possibly the best chance for Aizawl FC came in the 84th minute when Brandon hit a first-time shot from right in front of the goal. It seemed like a goal but Rakshit Dagar’s reflex helped him put a decent save and deny Aizawl from close range.

The breakthrough and equaliser finally came for Aizawl FC in the 90th minute when substitute Rohmingthanga Bawlte bundled home from close range after a cross from the left flank caused chaos in the Sudeva box. As the scoreline read 1-1, Sudeva Delhi FC shot themselves in the foot, and in added time, as Bawlte was brought down inside the box. Brandon stepped up and smashed home from the penalty spot to make the scoreline read 2-1 in Aizawl FC’s favour.