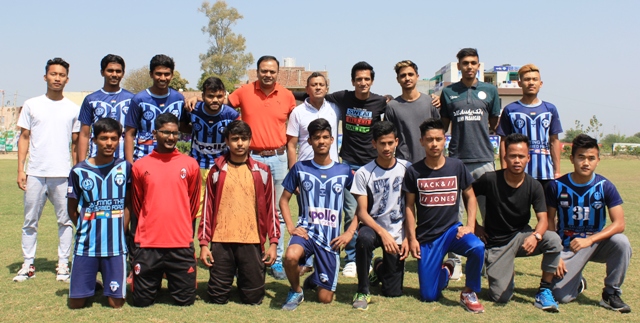 The Punjab-based side who won the Hero I-League, bringing the coveted title back to Punjab after 21 years has invested hugely in their youth setup which helped them win the U-15 Youth League trophy for three successive seasons.

Mr.  Das sounded ‘convinced’ that the club is taking the right steps in terms of football development.

“I’m delighted to have visited the academy and participate the I-League prize giving ceremony. I’m fully convinced that right things are happening at Minerva Punjab FC”, he said.

“The results are there for everyone to see. They’ve won the youth league and now they’ve conquered the I-League. I believe they have the ability and determination to become a premier club in Asia”, he commented.

Mr. Dhar also lauded Minerva Punjab FC’s effort which they have put in to nurture the budding talents.

“It’s great to see that time, money, energy and above all the passion have been put to develop such a fantastic facility. If only all professional clubs make similar investments, Indian Football will develop. Kudos to Minerva Punjab FC. Keep up the good work.”

Mr. Ranjit Bajaj, the person behind the club was elated to welcome the AIFF dignitaries. “It’s a dream come true for us that top dignitaries from AIFF have paid a visit to our Academy,” he stated.

“It shows that we have come a long way since we started and their visit will only encourage us and all the young players of Minerva Punjab FC. It also made them realise that if you work hard, all your dreams can actually come true”, he added.