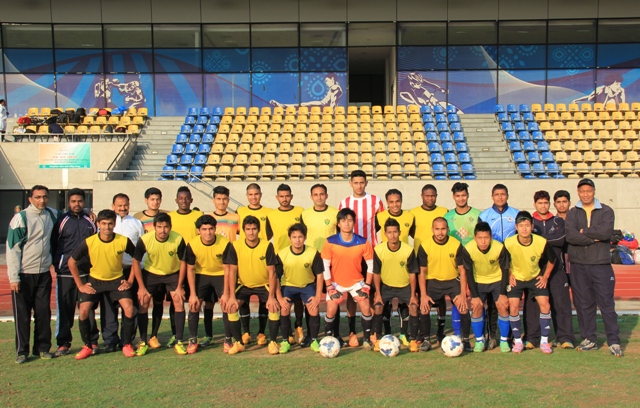 NEW DELHI: Hindustan FC take on PIFA Sports in their opening encounter of the Second Division League 2014/15 at the SSB Ranidanga Stadium in Siliguri. The match will be held on March 29, 2015.

The Club, led by Head Coach Abhijoy Basu, has been training vigorously for the last 2 months at the Commonwealth Village Sports Complex under the guidance of AFC qualified coaches. Before the start of the season itself, the club had made elaborate plans to form a formidable combination and scale better heights.

Nine of Hindustan players were chosen for Delhi State Sr. team in the recently concluded Santosh Trophy in Punjab, after having qualified from the North Zone league. Some of them are Vikrant Sharma, Monu Chowdhury, Sonu Beniwal, Pushpender Kundu, Abhishek Rawat & Vikas Rawat.

AFC ‘A’ qualified Coach and former Delhi State Captain Abhijoy Basu continues to guide the players along with another 2 AFC ‘C’ qualified coaches – Vikrant Sharma & Rajat Guha. Former State player & referee Mohd. Aslam will be the Manager of the team. Abdul Wahid a qualified Physiotherapist will assist the team.

“With the recent induction of some very good players with the existing strength, hope the team will be able to make the mark,” Basu said.

“We trust all the efforts will lead to good and satisfying results. In 2014, Hindustan FC were the Group Champions at Gangtok and it will be our ambition & endeavour to qualify this year for the Hero I-League.”

(with inputs from Hindustan FC)