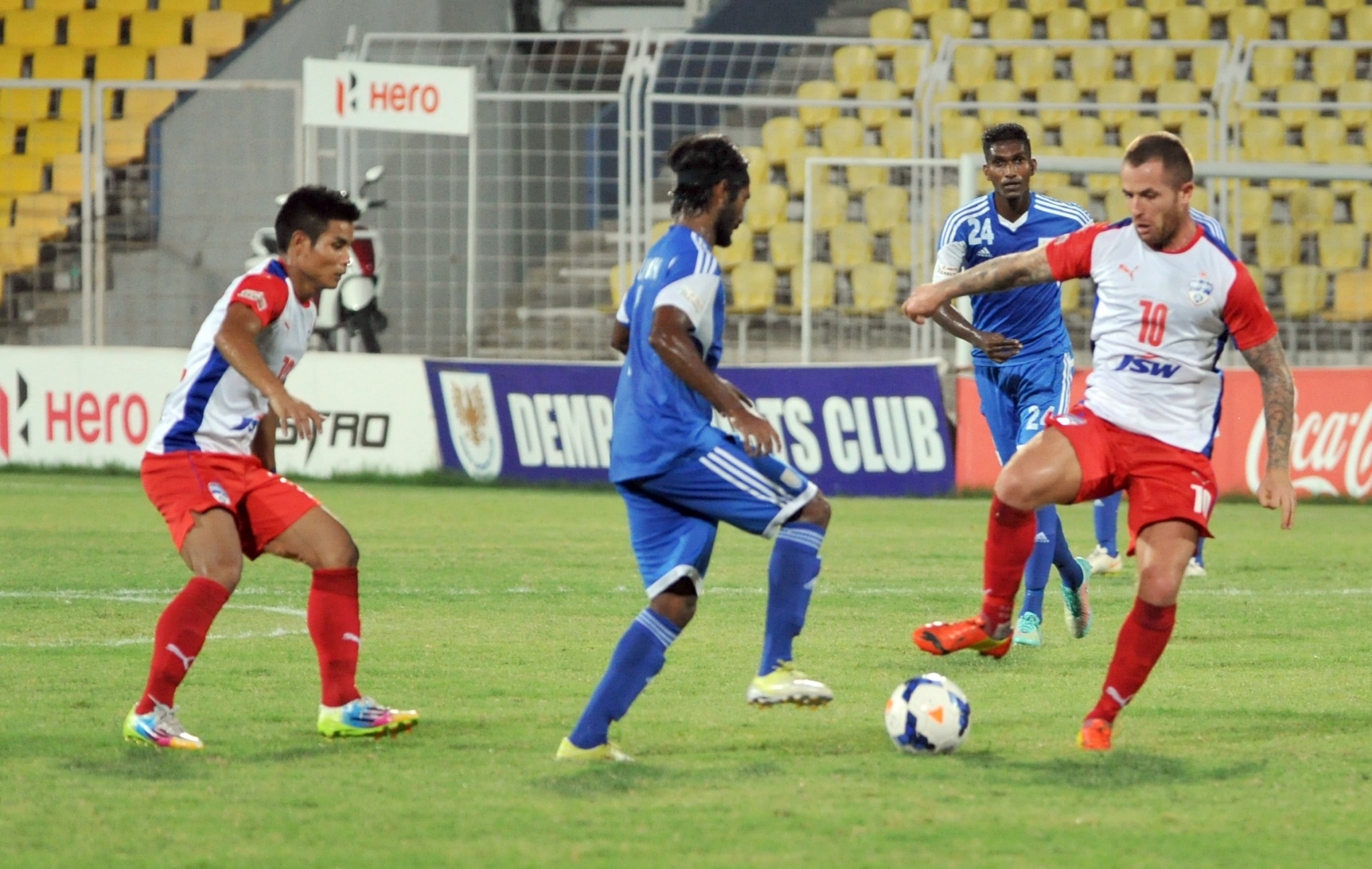 GOA: Dempo Sports Club and Bengaluru FC will have to risk everything in their concluding matches after finishing 1-1 in their Hero I-League clash at Nehru Stadium, Fatorda, on Saturday.

Dempo are rooted to the bottom half of the table with 19 points and will need a win against Salgaocar FC to escape relegation. Bengaluru FC, on the other hand are two points behind leaders Mohun Bagan and will need a win in their concluding win at home against the leaders to retain the title they won 12 months ago.

Bengaluru FC had an insipid first 45 minutes as the visitors were unable to stitch any moves and create any real pressure on the Dempo rearguard. Striker Sean Rooney could not impose himself and was easily tackled by Dempo defender Rowilson Rodrigues while CK Vineeth was almost invisible.

The only chance for Bengaluru FC in the first half came early for Rooney whose smart header missed the target narrowly.

It were Dempo all the way as the hosts controlled the proceedings and had the defenders press the panic buttons. Initially Jewel Raja and Francis Fernandes were orchestrating the moves but the former champions suffered due to the absence of a genuine goal scorer.

Lenny Rodrigues was the first to test the rival goalkeeper L Ralte with a long ranger that brushed a defender and went for an abortive corner kick. Minutes later Alwyn George’s shot landed straight into the waiting hands of the goalkeeper and a Joy Ferrao header saw the goalkeeper stay alert.

Francis had another chance to draw first blood but the India midfielder chose to go for glory himself after snatching the ball from Curtis Osano when passing to his unmarked teammates could have been a better option.

The last chance of the half, again for Dempo, fell at the feet of Jewel Raja, although the midfielder did not make it count, sending his effort just wide of the target.

All this while, Bengaluru FC surprisingly lacked potently, especially for a team that is challenging for the title.

In the second half, Bengaluru FC coach Ashley Westwood made two changes, replacing Sunil Chhetri (Robin Singh) and CK Vineeth (Udanta Singh). The changes worked as the visitors got the opening goal in the 65th minute when Robin headed home a well measured corner from Eugeneson Lyngdoh.

Bengaluru FC appeared to be cruising along nicely until substitute Uttam Rai spoiled their plans. The youngster collected a ball from Holicharan Narzary just inside the box and then picked up his spot well to beat the Bengaluru FC goalkeeper in the 77th minute.